So, not only did our daughter just turn 16 - yesterday we took our son to college. 2 milestones in 2 weeks. I'm not sure I'm up to this. No, he's not moving cross country. Yes, he'll be close enough to come home on the weekends, but still I can't help but remember that little blue-eyed baby who needed me for everything. Needless to say, I will NOT be perusing the scrapbooks and photo albums for a while, because I'll turn into a big tear-stained mess.


I'm thankful though because our children are entrusted into our care to raise and to love and to eventually send out into the world and become independent and it comforts me to know that he's not out there completely alone. God loves him even more than I do and I have to let him go in order for God to accomplish what he has set out to do. I know it's time and I know that the Lord has prepared me for this and I am confident in the young man that seems to have sprouted overnight.


In case y'all haven't figured it out - I tend to get emotional easily. I don't anger easily, but play 'Don't Blink, or "It Won't Be Like This For Long", or "I Can Only Imagine" and watch me bawl. The kids have me pegged. They know which songs will start the flood. They look over at me at the pivotal part of the movie to see if "Mama's crying". They know which commercials make my eyes well up. They think it's funny and in turn, that makes me laugh too.


I knew this day would come. I just didn't think it would get here so soon. It wasn't that long ago he was just a wee little lad: 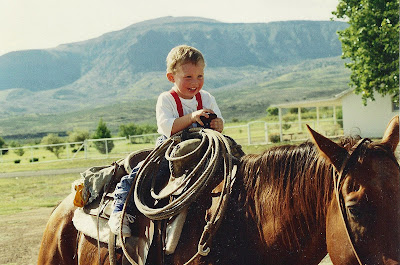 I have been truly blessed to be a stay-at-home mama. I worked until the day I went into labor. DH and I had discussed this beforehand and although there were plenty of times we had to pinch pennies, we never went without and the blessings along the way have been too numerous to count.


Now, I'm not against working moms. In fact, I stand in awe of how y'all get it all done, but this was simply the right choice for us. The kids were in school for a few years before we began to homeschool and I subbed every day DH didn't need me to help him. It was hard! I also automated a library for about a year. We spent so much time there that they hired me, but that's the extent of my working Mama experience and my hat's off to all of you who do it each and every day.


Even so, all the countless hours I had to enjoy raising our children disappeared all to quickly. I have always been cognizant of time moving quickly, but it still caught me by surprise. I think my penchant for photography might be my way of stopping time or at least capturing it. I treasure those snapshots from childhood and we have all spent countless hours flipping through the photos, reminiscing. We never took big, fancy vacations, but I don't think the kids missed that. Our albums are filled with the small everyday moments that make a childhood memorable. At least I hope they remember those times fondly.


Yesterday was a good day. Everything went smoothly. There were so many employees and upperclassmen there to help and the moving part was painless. The trip to the bookstore...not so much. This is what $500 looks like. OUCH! 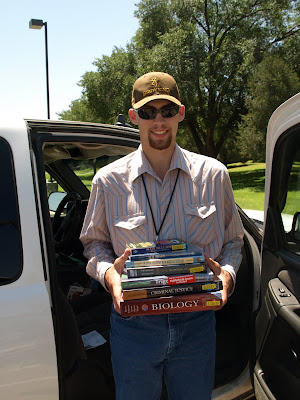 I never lived in a dorm, but I have forgotten how tiny they are! He's on the 6th floor. At least he has a view of some open spaces: 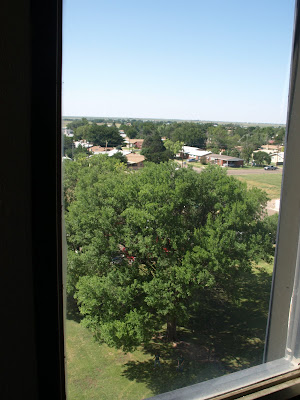 I think this is the tallest building this country boy's ever even been in. 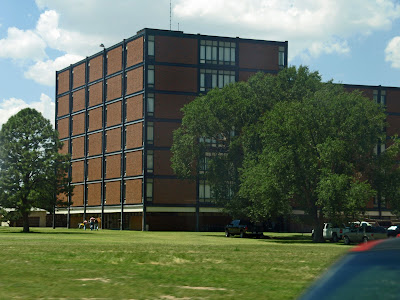 I think the most difficult part of the transition will be sharing a small room and the lack of quiet. Heights aren't really his thing either, but I think he'll be ok.

We met his roommate and they seem to be a pretty good fit - both boys came armed with the mandatory camo accoutrement's.

DH and DD and I left after dinner and headed back home. I faired better than I thought I would, but good gravy, it was hard driving away from there! The tears come and go at the oddest times. I'm just trying to keep busy. I worked in his room yesterday. I counted 23 guitar picks! Now I think I'll work on some simple pillow shams for 2 huge pillows he can throw on his bed in order to make it a bit more comfortable.

Last night DD was IMing on the computer and I asked her who she was talking to. She was talking to her brother. LOL! Then a bit later, he and I had a conversation over texts. My goodness, how the times have changed. We didn't even phone home much when I was in college because it was too expensive and no, that was NOT during the ice age as our children like to call it!

He just phoned DD - one of her favorite bands is playing a concert at the college. She's envious, but I told her her she would be heading off before long herself, but I would rather NOT have to think about that at this juncture.

I had a hard time going to sleep though. I really missed hearing his guitar that he plays every night and when I got up in the middle of the night, his room was empty.

He was up and about awfully early this morning and headed to breakfast and then church - good boy.

I'm trying not to hover. I've been called a mother hen on more than one occasion - by my own mother no less, but I think I've done a pretty good job of letting go.

Now if I can just make it through until Friday...he's coming home for the Ranch Rodeo! Gotta remember to make his favorite cookies to take back with him...

So for those of you who are raising little ones, you may think the days are dragging by, but be forewarned...don't blink...

The Quilt that Went to College

I've been working on a quilt for DS to take to college for some time and this morning I added the final stitch!

When I started this project I asked him what kind of quilt he wanted. He first said that I didn't need to make a quilt.

Excuse me? Send you to college without a quilt? Impossible! A quilt is like a little piece of home. A comfort in the storm of final exams. A refuge from dorm life.

Well, it will keep you warm anyways.


Camo he requested and Camo he got although the initial fabric he chose was a brushed cotton and we had to nix that fabric after it refused to cooperate. Seems it had something against being ironed and it faded horribly. So on to fabric #2 which was better behaved.


A dear friend from Florida who quilts too suggested the Bear Paw pattern when I was floundering for a pattern. I have smart friends. It was the perfect choice. It was my first attempt at the pattern and I was apprehensive about my quilting ineptitude, but I was pleased with the results. Most all of my seams match and I didn't even cut off all the points.


This actually turned out to be a prayer quilt because I sewed a prayer into every seam. One for safety... one for discernment... one for protection... one for seeking God's guidance...and so on. It almost turned into a 20' quilt! LOL!


I had planned on quilting it myself, but in the interest of time, or lack thereof, I caved and took it to a longarm quilter in town. I've never had one quilted, but I just might have to save my pennies because she did a beautiful job. DS chose the quilting pattern and thread color and we're all tickled with the finished product. I took it in on Wednesday and she phoned me on Friday saying that it was ready to pick up! It took me two days to make the binding and hand stitch that on and this morning a new quilt was born: 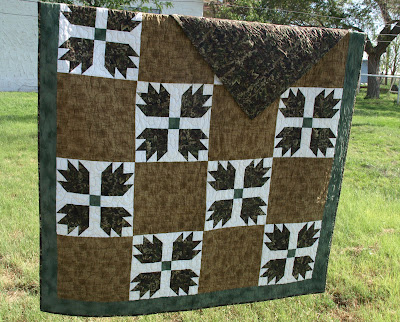 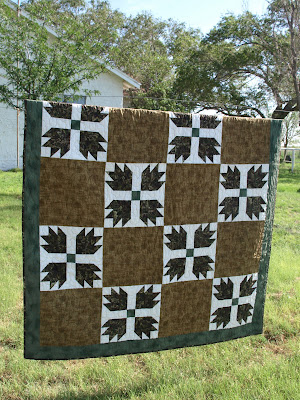 Someone else decided she had to test drive it first: 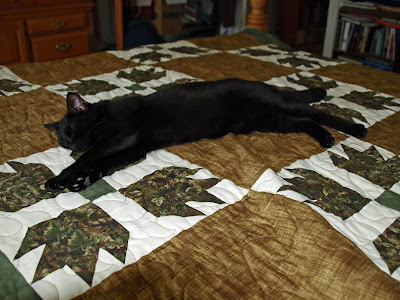 It's really a rather simple quilt, but it was sewn with love in every stitch. After all, that's what quilts are all about.

From This to This...

Breathe. Seems I'm having to remind myself to do that a lot lately. For the most part, life at the end of the dirt road moves along at a different pace than life in town, but here lately, it seems to have moved into the fast lane. The days and weeks and months and years are moving all too quickly for this 'sit on the porch and visit a spell' gal.

She went from this: 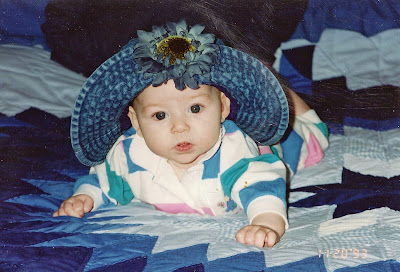 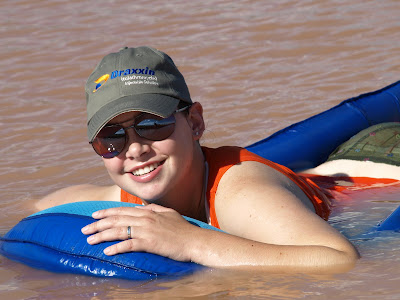 Seems that way anyway. Guess I'm showing my age. Daddy always said that time sped up as you got older. If that's the case, then I look pretty good for my age.

Still, I would gladly accept any and all tips for making time slow down.

This kid is not your typical teenage girl. She's perfectly thrilled with hand me downs from Daddy and her older brother's closet. She hates to shop. She's so grounded in her faith and who she is. Wish I had been so sure of myself at that age. She's an original and has never been one to follow the crowd. She's not afraid to stand up for her beliefs and go against the grain of what other kids are doing. She's got a sweet, independent spirit with a little bit of spice thrown in for good measure. She's a homeschooler who is socialized.

I've lost count of the number of people who warned me of the dangers of homeschooling. Number one on the list was the lack of socialization. LOL! Not a problem around here! In fact, this kid's social life is wearing me out! She's equally comfortable around kids and adults.

Just spent Saturday with 10 of her friends. One spent the night Friday. One Saturday. Another came from out of town for Saturday's festivities. 11 kids ate pizza. 10 kids went to the movies and Dairy Queen. 6 kids came out here to swim in the dirt tank and take part in a massive mud fight. Hot dogs were consumed and a fire was lit in the fire pit.

Now she is off for yet another sleepover with one of those sweet friends.

On the 9th, another friend is coming from out of town to spend a few days here.

We just got back from a 4-H State Conference trip where she met numerous new friends she added to her network. (Thank you, Charlie, for my Texas Aggie Fight Song Ringtone!)

I can't keep up with her.

She's such a joy. Yes, she sometimes balks when I ask her to do the dishes or help me in the yard, but she's an amazing kid. I cherish the many evenings when she comes into our room and sprawls out on the bed for a good long visit. She talks to me about a lot of things and I am so very thankful for that.

I know lots of parents who don't enjoy their teenagers. I'm not one of them. I love watching them grow and learn. They make mistakes and stumble through the potholes of life, but I'm holding on to the knowledge that God will be with them every step of the way.

May His love always shine through you and I send prayers of thanks to Him for giving me the privilege of being your Mama. I love you!
Posted by Ranch Wife at 3:54 PM 4 comments: