When the Phone Rings

Most mornings begin rather quietly around here. Up before the sun and in the kitchen before my vision clears. Ah! The rich smell of coffee wafts through the air as I measure the proper amount for the morning jolt. Funny thing is...I can't drink the stuff. Love the aroma, but it tastes awful.
I make it for DH.
Because I love him.
Because its the little things.
This week we're working cattle. We'll have our big Spring Works in May, but once in a while we have a week or two of smaller cow works. So I don't have a big crew. Only 6, but 6 or 12, doesn't matter - cooking is still what I do. So I plan the morning and take the rolls from their hiding place. Around here, rolls must sometimes be hidden or they simply disappear into thin air someone's tummy and although I love making homemade bread, I don't love it everyday so I made a double batch the day before.
Brrrinnng. Brrrinnng. I reach for my cell phone. No new fangled music for my ringtone although I once had "Amarillo By Morning". I love the tinny ring of an old fashioned telephone...on my cell phone. I love my technology, but long for back in the day when times were simpler. A contradiction. Yep. that'd be me.
"Hello?"
It's DH.
"What are you doing?"
Oh. Oh. I'm familiar with that question and immediately begin to scurry about. Turn off the stove. The oven. The Iron. I don't know what's coming, but I know what's coming.

DH might be bringing in a newborn calf that lost it's Mama... or need me to run into town for parts... or need me to help him pull a well...or to come help him doctor a horse...or work the gate while he sorts cattle...or to haul a rig over to the other side of the ranch...or to...

And, no, I'm not complaining. I love helping him although I often feel badly that he's stuck with me for help. It pays to be a 'fly by the seat of your pants' kinda gal when you're a ranch wife and after 24 years, I've done a lot of flying.
"I'm cooking dinner."
"I need you to hook up to a trailer. Bring me the medicine chest 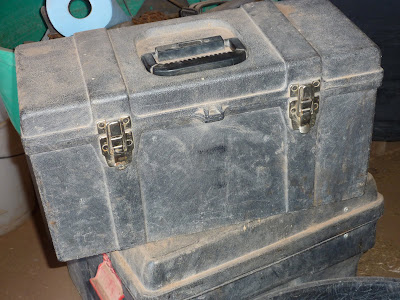 and a bottle of Banamine. 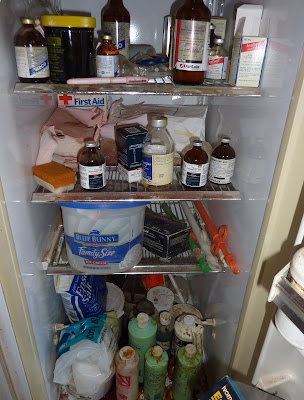 Grandpa's horse is colicking."
"Where are you?"
"Head to the shop and go east to El Tank. Take that road to the south. You'll see us down here a ways".

So I scurry around a bit more, load up, hook up, 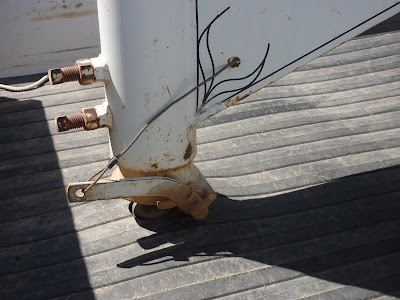 and drive out. Takes me about 30 minutes to bounce over the roads.

Truth be told, I love it when I get called away from the kitchen, although I don't love the reasons for it and when I get back, it's crunch time in order to make up for the lost time.

Grandpa's horse was sure enough feeling puny. Poor guy's knees were buckling everytime he even attempted to take a step and he was trying his darnedest to plop down. DH gave him the magic shot and about 30 minutes later, he looked quite relieved and then disappointed when Grandpa loaded him in the trailer. He was itching to finish the job, but we weren't taking any chances. Thank goodness that's all it took. No pictures of the poor old pony. I had strict instructions to not leave my seat behind the wheel. Shoot. That limited my photo opportunity severely, but I snuck in what I could. Lots of dust and dirt. It's been a rough winter around here. After a banner year of record moisture last year, we're high and dry now. No moisture since September and good old Farmer's Almanac says not to hold our breath if we're waiting on rain. We spend lots of time praying.

Never get tired of aiming my camera in this direction: 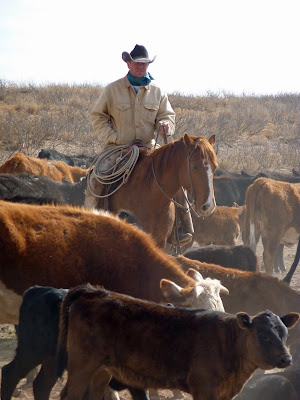 Sure do wish that dust would settle: 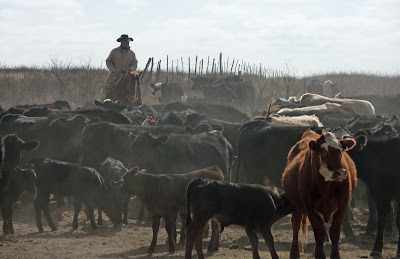 DH stopped to tie up the fence in order to let some little ragga-muffin calves who had escaped, cross back: 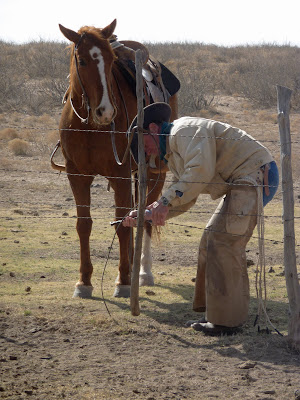 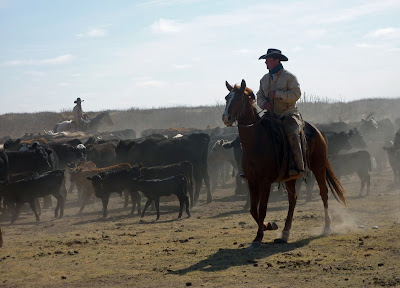 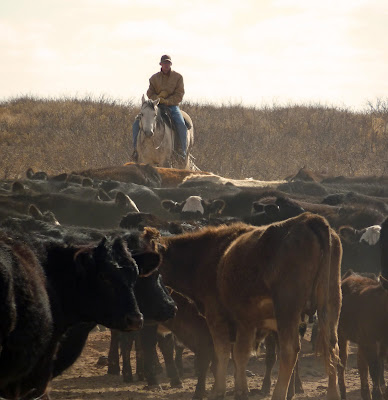 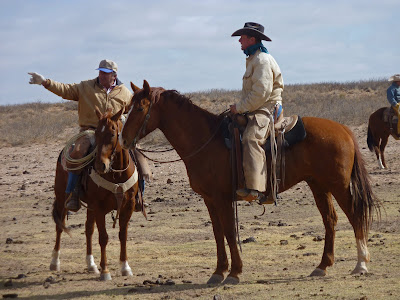 Sure do wish those fluffy, white clouds would dump some rain: 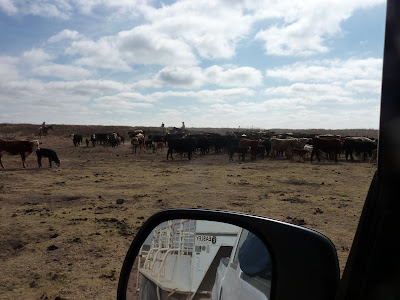 Had to wait around a bit and let the crew get down the road a piece before we headed to the house. 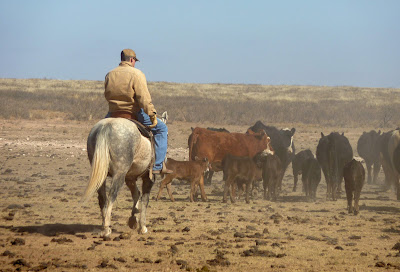 A rouge calf broke from the herd and Bryce went after him. Grandpa told me to back the trailer down around the bend.

Um. No. Backing trailers is something I have been unable to master. Well, let me clarify that. I can back them as long as the road is straight and the gate is wide. It might not be pretty, but I can get the job done.

Grandpa got that twinkle in his eye and we both chuckled. Sure glad the rest of the crew's attention was diverted. When I initially drove up, Dave looked surprised and asked whether I had hooked up the trailer. He received a loving, yet withering look in reply.

Two hours have passed since the phone call. Doesn't leave me much time to round up dinner. Sure am glad the good Lord takes charge around here. He knew that double batch of biscuits was gonna come in handy and he's gonna send that rain any day now.
Posted by Ranch Wife at 7:32 AM 18 comments: