I didn't intend to not post these past few weeks, but life has just been busy and I didn't think scrubbing windows was deemed a very blog worthy subject.

The Safari Club had their annual banquet which includes a silent auction and I spent 2 days making 4 trips into town to help organize, set up, and work. We had 400 tickets and sold out so the little Civic Center was packed for 2 nights. Friday night is a casual pizza night and Saturday night is a gussied up night for prime rib: 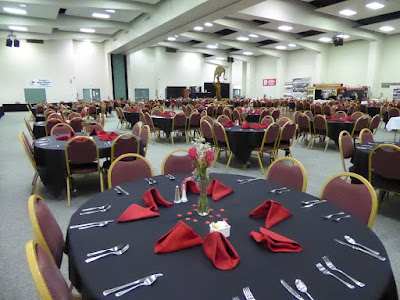 I made an impromptu trip to see my mom for a week and left early on a Tuesday morning after working a long day at the sale barn on Monday and not getting home until after 9 pm. Then I was back home late on Sunday night and back for a long Monday sale the next day. Then yesterday we had a special Brangus sale and I've been trying desperately to surround myself with an anti-flu shield. Half of my co-workers had  the flu on Monday and the other half had it yesterday. DH sent me a text that simply said, "Disinfect thyself." LOL. He greeted me at the door with hand sanitizer, bleach, vitamin C tablets, and instructions to head straight to the shower. He had the tea kettle whistling when I climbed out. I don't know whether his gestures are due to the fact that I am loved or to the fact that he does not want to catch the flu. *Grin* 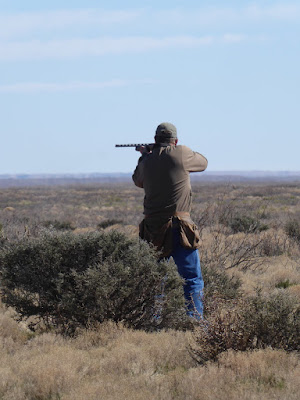 and no, I did not shoot these. DH did, but we chased and cleaned them together and he wanted to take a picture of me to share with the kids 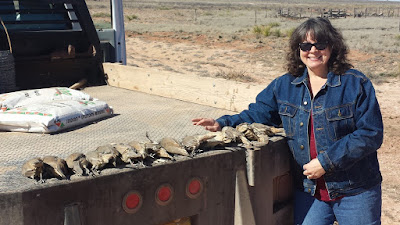 We ran the steers through the chute one morning and poured them with an insecticide (Cylence): 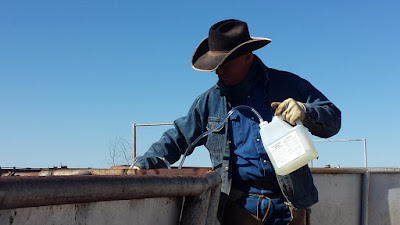 DH surprised me on my birthday with a stand that he made to hold bananas: 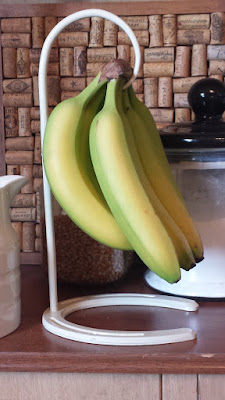 And a matching paper towel holder: 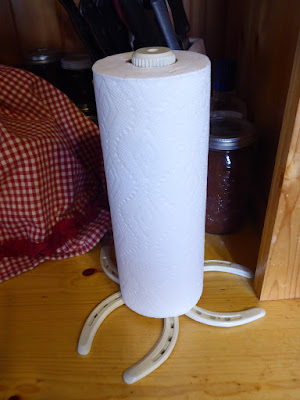 I love them both and I love that he makes things like this that are useful without me asking.

I've been reading and have made good progress on my 2016 Reading Challenge. I am currently reading Letters of a Woman Homesteader by Elinore Pruitt Stewart , which is not on that list. :)

Now don't gasp. I AM stitching on a binding so hopefully that gets me out of hot water with my quilting friends who have been shaking their fingers at me. 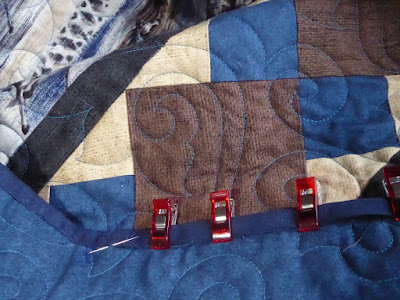 And I think that catches y'all up on recent happenings. Maybe next week will find me turning on the sewing machine!
Posted by Ranch Wife at 5:56 PM 9 comments:

Breakfast At Our House

So I made DH toads in the hole for breakfast the other morning and I crossed the bacon over them. -picture from a post a few weeks ago...minus the bacon, :) - 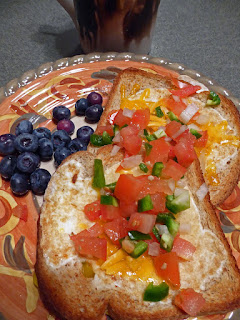 DH: But the bacon's touching. ( this never matters to him - he's just being silly)
Me: That's an X for a kiss.
DH: Isn't that also the warning sign for poison?

LOL. After all these years, you would think I would see these things coming.
Posted by Ranch Wife at 5:30 AM 3 comments:

Last sunny, warm-ish Sunday morning found us bouncing over ranch roads. We enjoyed a  good Sunday morning church service via our local talk radio station and the easy company of being together. DH was pulling his traps (We have an abundance of coyotes - thus DH was trapping for predator control), checking cattle, and we chased quail. We spent some time on Sardine mountain which I am renaming Rattlesnake mountain. DH was up here last spring and saw at least 50 Rattlesnakes on that one trip. He caught 15 and took them to our friend who is a taxidermist. I am thankful I was not with him on that trip although I did take the snakes to the taxidermist. I am absolutely terrified of Rattlesnakes so I told DH that taking them to town was a testament to how much I loved him. :)

The sun was just beginning to warm up the rocks, but it it was only 40 degrees so the snakes hadn't made their way to their sunning spots just yet although I was warned multiple times to watch each step. I tried not to think about the fact that there was a big, fat Rattlesnake coiled under pretty much every rock I stepped on. -Shiver-. 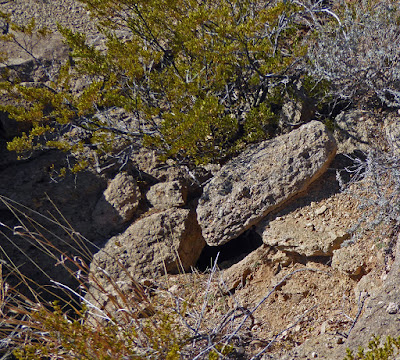 Other than that - this is such a pretty spot: 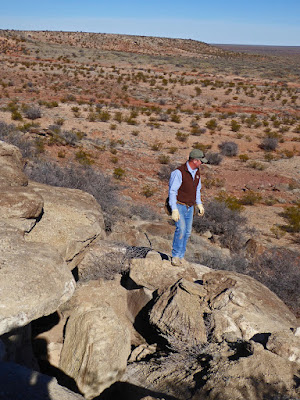 And the first ladybug of the year was warming herself on the rocks: 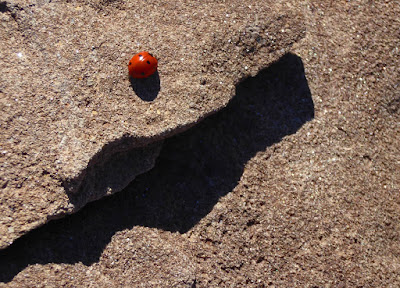 Every time DH bent down, I wondered if he'd found a snake: 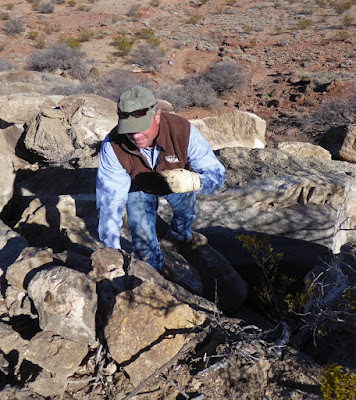 Nope, Just a porcupine in one trap, released the little fella, and grinned as we watched him toddle on his merry way. He wasn't hurt. 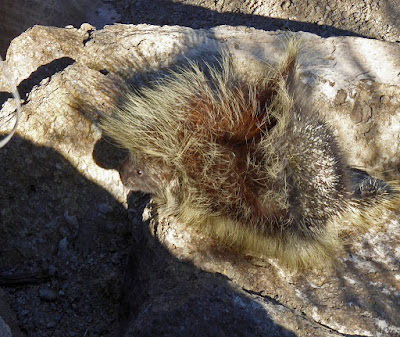 And thankfully, no snakes were spotted on this trip. I was afraid to look too hard, but DH said looking hard was exactly what I ought to be doing: 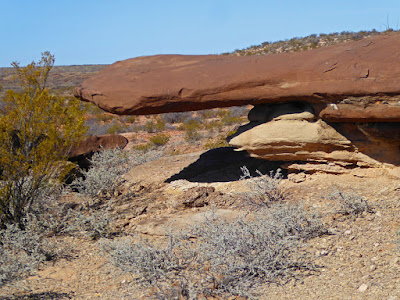 We spotted lots of deer on the horizon. They were just dots and this is a terrible picture. Wish I had my good camera with me.

Antelope were out grazing: 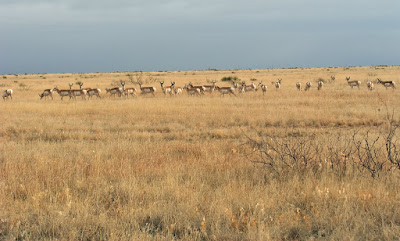 Cattle were dipping their toes into the shoreline:

.Quail season is over on the 15th and DH wanted to add a few more to our freezer. 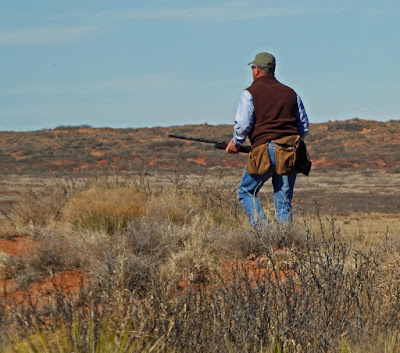 For those of you who don't know, those little rascals are FAST! It's pretty bad when you are outrun by a bird with 2" legs. LOL  I was plumb give out. DH is fast and stealthy. Me. Not so much. :)

Here are a couple of quail from the house covey. We never shoot the ones around the house and they often find their way into the chicken coop. I took this shot when we had all that snow. They're pretty little things: 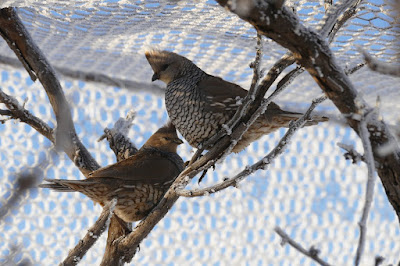 We came home about 2 and I threw some salmon in the oven and made a salad. When mornings start at 4 a.m. and includes chasing quail, I'm starting to fade by 2, but I rallied and made it until 7.  To say that I slept like a log would be an understatement, but it makes me wonder how I'm going to make it when the sun doesn't set until 9:30 this summer.
Posted by Ranch Wife at 4:00 AM 4 comments:

We're beef eaters. We raise cattle so it only stands to reason, but we are equal opportunity diners and we eat a variety of foods. And we like salmon. And I probably fix it 3 or 4 times a month. We used to eat Tilapia too...until we all saw a documentary about them being bottom feeders a few years back and now I don't fix it anymore. -Grin- My apologies to all you Tilapia eaters out there.

The other day, I was looking for another way to fix salmon. It was too windy to grill it and I thought about pan searing it. I usually bake it. So I took a gamble and looked online and this recipe from the Creole Contessa popped up. I quickly scanned it and was glad to see that I had all the ingredients on hand so Cajun Salmon was on the menu.

And we loved it...a lot!  So I of course thought of y'all first and I knew I had to share it. I've linked to her site above because it's definitely worth browsing through. I keep going back because there's lots of recipes and I haven't had much time, but my list of things to try is getting longer.

*Preheat oven to 475°. Mix your first 6 seasoning together in a small bowl - set aside. Rub both sides of your salmon with the olive oil. Rub your seasoning mix into both sides of the salmon. Top with part of the lemon juice and zest. I baked mine for 15 minutes. Remove from oven and sprinkle with parsley and more lemon juice. I took the photo before I added the parsley. 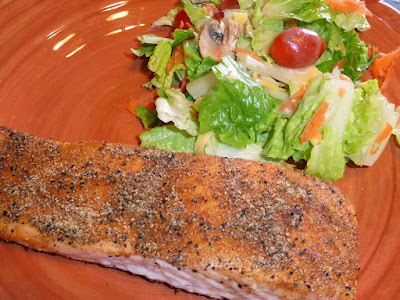 This has a nice kick to it that won us over.
Posted by Ranch Wife at 9:59 AM 5 comments: