Its been rather quiet in my little corner of blogland. DH and I left the dirt road for a while...wanna guess where we've been or shall I just tell you? 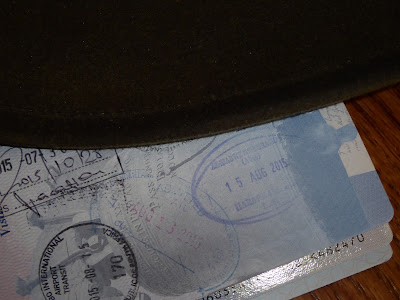 Got stamps on our passports.
Visited a new country.
Flew over an ocean.
Crossed off the biggest thing on our bucket list.
Were completely unplugged for 18 days.
Slept in a tent.
Spent some time on a river.
Climbed over many a mountain.
Took 1000 pictures
Lost luggage.
Found adventure.
That's pretty vague, isn't it?

I'm still trying to process it all and I'm thinking its going to take me a while. I'm finding that I am not adjusting well to plugging back in. Haven't turned on the tv or spent any time on the computer with the exception of beginning this post. Haven't even had the desire to turn on my sewing machine. I kept a journal and wrote furiously in the tiny amount of time I had to write. I didn't want to forget a moment. We completely immersed ourselves into the sights and sounds and culture that surrounded us and we soaked in every ounce of every day along the way.

Any guesses? DH and I had saved up for years for this trip and 19 months ago we signed on the dotted line and took the plunge: 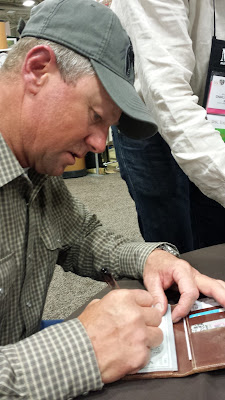 Yep. We just spent the last 2 1/2 weeks in Zimbabwe, Africa on safari and it was everything and more than we ever could have imagined. 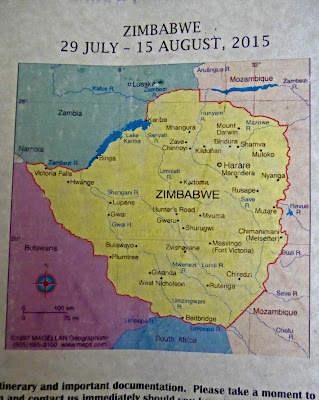 We've talked about it for years and DH said if we ever had the opportunity to go, he wanted to experience wild Africa. No game ranch or high fence hunting. Not that we have anything against that, it just wasn't what we wanted so after years of research and reading and visiting with various people, we made a decision. 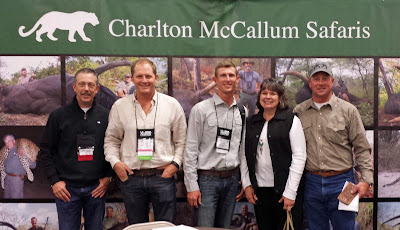 DH's brother has been to different parts of Africa numerous times and he, and his new wife of 3 months, joined us. I hope you'll indulge me as I attempt to put our adventure down into words. An African Safari from a woman's point of view. :) You can skip these posts if you wish, but I really want to include them here as my blog is a journal of our life and I do not want to leave this out. For people who never travel or take vacations, this was a really big deal. Passports were applied for. We didn't even have any luggage so we had to shop for everything and traveling with firearms requires lots of documentation. It took 5 airplanes, 40 hours, and 10,500 miles for us to reach our final destination. But our first night was spent in a lovely place, in Johannesburg, South Africa  called AfricaSky Guest House 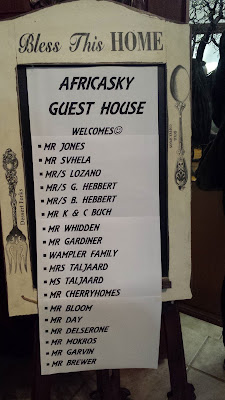 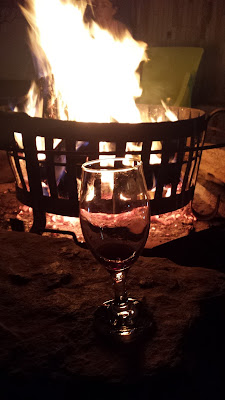 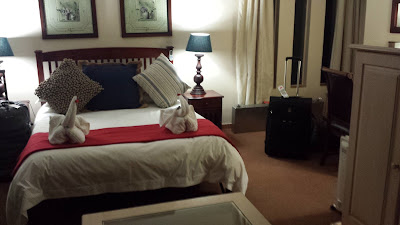 Apparently we are still early birds - even after flying for umpteen hours and we, and a lovely man named Gustoff, from Germany, were the first ones to arrive in the dining area. I'm telling you, you meet the most interesting people while traveling and he and DH just hit it off: 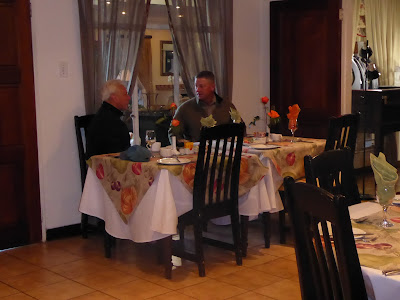 After breakfast, we were whisked back to the airport and headed for Harare, Zimbabwe where we somehow were separated from our luggage. After 3 hours of going through customs and getting visas stamped and standing in one line after another, the boys' guns and ammo and one bag were eventually located. Apparently, SSA (South African Airways) left some luggage behind in order to carry enough fuel. Yes, fuel trumps luggage - thankfully! We had arranged to charter into camp and our window of opportunity to make the trip was quickly closing so we made the decision to let the boys fly into camp and us girls would stay behind and wait for our luggage to catch up to us. We were deposited at Amanzi guest lodge

and the dear girl from the CMS office gathered us up and took us to a shopping district as my BIL's wife wanted to shop for some clothes and bathroom items: 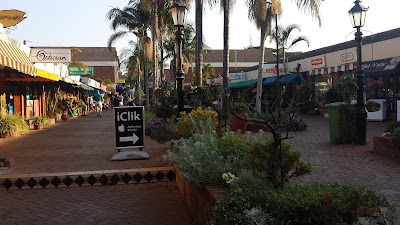 I was in pretty good shape because DH (smart man) had suggested we carry all essentials in our carry on, but I did pick up a shirt to sleep in and  the next morning we were once again collected and went in search of our luggage. We met with officials who were very curt and barked orders at us as we moved through the process and I was very thankful we minded our p's and q's and did not commit any transgressions that required a visit to the pokey, because somehow, I think that might not have been a pleasant place to stay.
We commiserated with new friends from Michigan who were also luggage-less and as you can tell by the beverage bottles, it was a rather long wait: 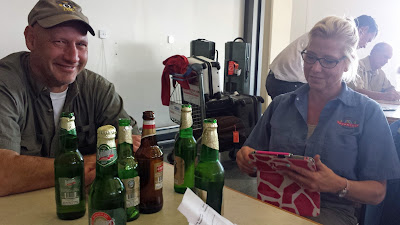 Thankfully, all bags were eventually present and accounted for and arrangements were made for us charter into camp. 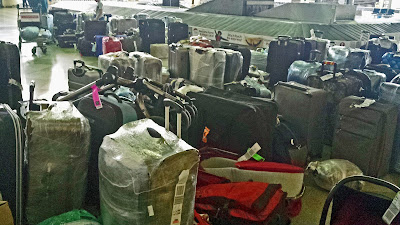 I was rather excited to charter out, albeit, a bit apprehensive as I'd never flown in a small plane, but I loved it. 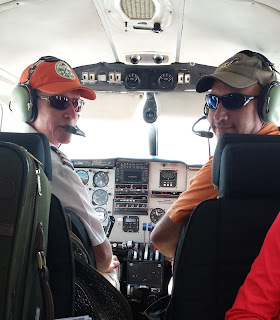 I got to sit shotgun and visit with our pilot, Nick, via the headset as I drank in the view: 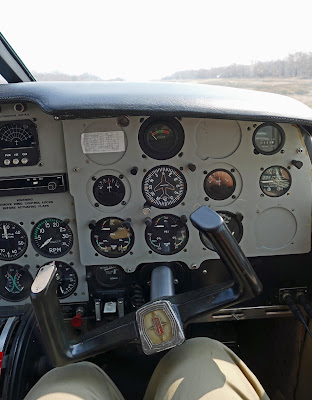 We were soon reunited with our DH's where we teased them about running off with their guns and ammo and whiskey and leaving us girls behind. 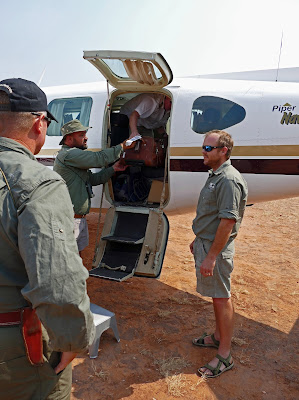 And then we drove on to camp: 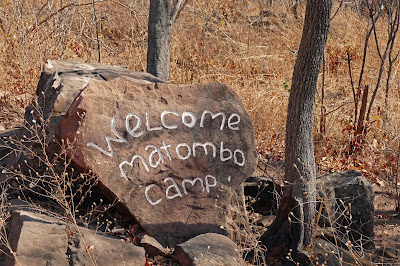 English and Shona are both official languages in Zimbabwe and Matombo translates to "Rock" which was an appropriate name since it can only be reached by climbing over incredibly rough, rocky roads to reach the top. Home sweet home for the next 11 days: 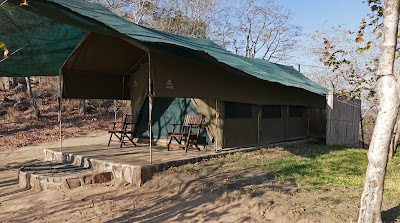 With a stunning view of the Zambezi River: 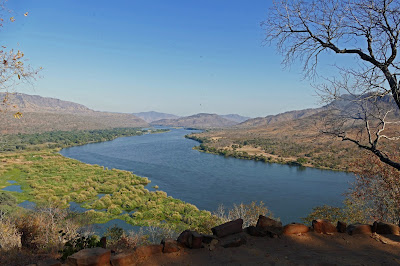 My BIL was hunting tuskless elephant, hippo, and croc and we were hunting Cape Buffalo and Plains Game  so we had separate professional hunters (PH) and hunted separately, but saw each other for a short time in the mornings and spent our evenings by the fire and around the supper table: 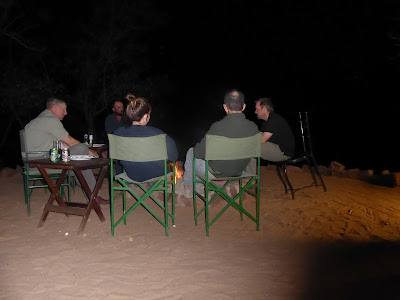 Mornings started at 5 or 5:30 with 2 members of the staff standing outside our tent saying, "Knock, knock. Good morning. How are you?" -insert- charming Zimbabwe accent. A quick cup of coffee or tea - a hot breakfast - loading the crew into the truck and we headed off in the dark.

Adventure lies ahead!
Posted by Ranch Wife at 12:45 PM 16 comments: