100 Follower Giveaway and another project for the Christmas Train!

Oh, y'all are amazing! When I started this little blog, I never imagined more than a handful of people would even give a hoot. I was thinking 4 or 5. This is just such a wonderful community and I am constantly inspired and amazed and entertained by all of you. So thank you for taking the time to stop in and peek into life at the end of the dirt road.

So since I can't very well have y'all gathered at my dining room table and feed you (which is pretty much the answer to everything around here), I will celebrate you with a giveaway and you have a choice! Three choices! I wanted to give you something that you could use whether you're a quilter, or  knitter, or cross-stitcher, or scrapbooker.

1. I have a layer cake of Blush that I have been hoarding for some time that can be yours 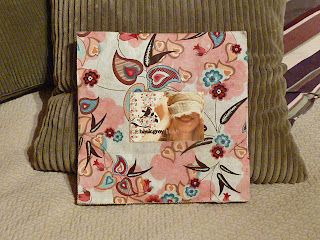 Hopefully I've covered all the bases!

so if you'll leave a comment and tell me one of your guilty pleasures and which gift you would like, I'll put your name in the hat. At the moment, mine happens to be a handful of animal crackers dunked into Nutella one at a time. I also really dislike leaving my dirt road, but when I do, I love puttering around in little towns that I drove through. My Mom asks why it takes me so long when I drive to visit her and I feel guilty.

I will leave this open until Midnight (Mountain Time), Sunday night, May 6th and choose the winner on Monday morning. Oh, and I have to limit this to followers since the reason I am having this giveaway is because of my followers so no anonymous comments please and please make sure you are not a non-reply blogger because I will have no way of contacting you and that makes me sad because I want you to win. :)

Now, if anyone can tell me what happened to April, I would appreciate it. I'm not complaining though because time cannot speed up enough since I'm waiting for our boy to come home.

Here's my contribution to the April Christmas Through the Year and I promise you will NOT see him again, unless Darlene and Cheryl call for a recap at the end of the year and then you can blame it on them :) He's going to hibernate for the remainder of the year: 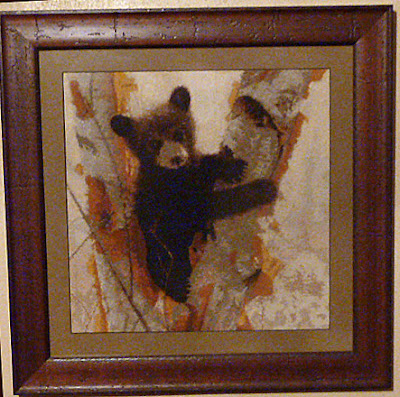 I know not of what you speak.

Honestly, in 25 years of marriage, we have been on 1 four day family vacation to Carlsbad Caverns and Amarillo, TX. LOL. Its a good thing we love our lifestyle! :) This is the first place we've ever had any help and we've never had neighbors so leaving the ranch was just not an option. Thankfully we did things like camp and hunt and fish with the kids, but those were all things we could do without ever leaving the dirt road. DH and I did get away for 1 night years ago. The people that owned the ranch gave us a night at the Gage Hotel in Marfa, TX for a Christmas gift one year. It was October before we were able to use it. LOL. My parents were down for a visit and we snuck away.

So last week we snuck off again. We have help at North Camp and he was about to quit and go back to TX and baby chicks were arriving the next week so DH called me on a Thursday morning at 11 and said, "Can you be ready to go at 1" I knew that 'fly by the seat of my pants' thing was going to come in handy!

I whipped up food for my FIL who helps us 3 days a week right now and stood in the closet contemplating what I had to wear that did not have barbed wire snags, or bleach on it. Then I popped on the internet and looked for a deal. Yay! Its the off season in the mountains and they are only 2 hours from us so I snagged a really good deal and off we went!
We got really excited when we saw this: 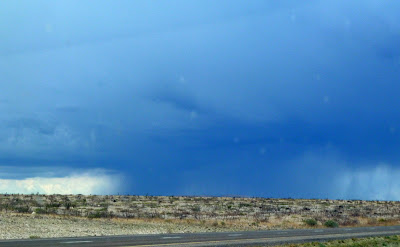 Yes, that is rain. We are in desperate need of moisture. Seriously. Not a drop since the 10" of snow we had at Christmas and last year was the driest, hottest year on record.

We stayed at a really nice hotel: Inn of the Mountain Gods. Its the off season so we found a really good deal. 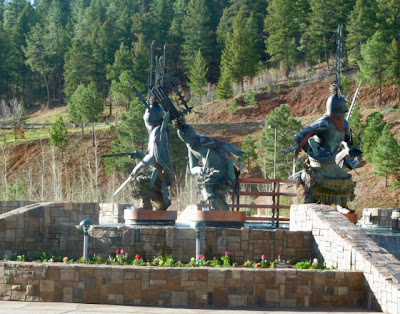 And as soon as we checked in and admired the view from our balcony: 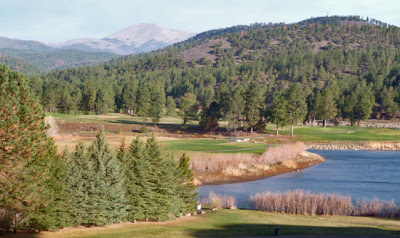 We were off. Ruidoso is a darling little town with lots of cute shops and character, but we sped right through there and headed for the hills.

After all, we came up here to hike and hike we did. I found out really quick that this mountain gal has been in the flats for far too long and although I walk for miles every day, hiking in the mountains is a different story. Wheweeee! I was a huffin and a puffin and we only hiked for about 2 hours before we lost the light. Still, it was magnificent and the air! Oh, I had forgotten what the mountain air smelled like! It brought tears to my eyes because I miss it so much. 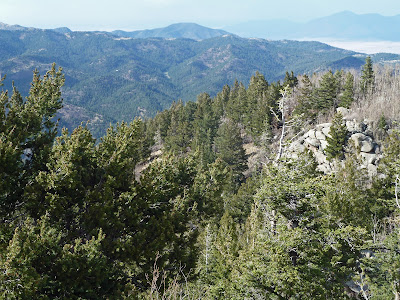 Then DH and I scurried back to the hotel and bellied up to the bar. 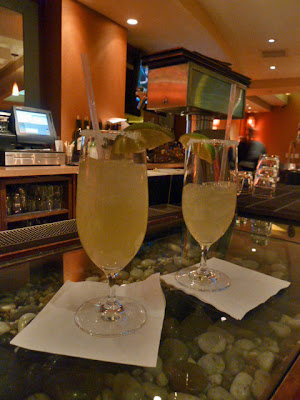 These were included in our package deal. Those of you that know me are laughing because I don't drink. I don't have anything against it, I just don't. I might have half a glass of wine twice a year. I always joke that if I drink any more I'll either be sleeping under the table or dancing on top of it.

This hotel is on the Mescalaro Indian Reservation and the accomodations and staff were impecable. Never stayed in a place that had such attentive staff. 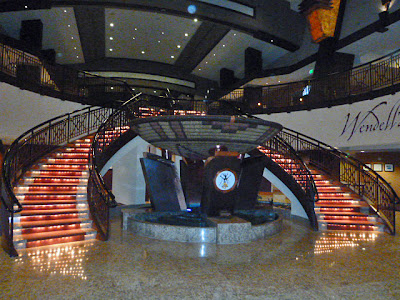 Then we really splurged and ate at the Hotel Restaurant. 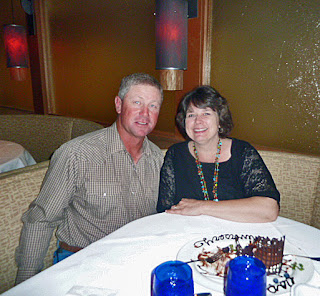 Fab-u-lous! They had a chef who really knew how to cook a steak! And then the waiter brought this out: 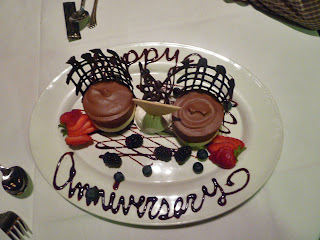 Compliments of the chef he said. How sweet is that? Can I just say that we had never eaten anything like it. It was unbelievable. A Godiva Chocolate Mousse that we could not finish and we threw the other half in the cooler and brought it home to share the next day.

So, I figure most people sleep in when they go on vacation, or so I hear. Well if you plan to sleep in, don't go on vacation with us. LOL. We slept in until close to 6 and then DH paced until breakfast opened up at 7. Breakfast was also included in our stay and we scarfed down made to order omelets and hash browns and fresh fruit to fuel us for the day ahead.

Inn of the Mountain Gods also has a casino that we wandered through while we waited for breakfast, but we're not gamblers and we didn't even play the penny slots. They also have a venue for concerts and they have one every weekend. Ted Nugent was coming in a few weeks and Engelbert Humperdink (LOL) was there that weekend. Ronnie Dunn, from Brooks and Dunn was on the schedule too as was Alison Krause and Union Station, and Kellie Pickler.

After breakfast, we headed back to the mountains. In the summer, they are swarming with peoople and there is nary an open spot that is not filled with tents and camping families. We however, beat the crowds and we hiked for over 4 hours and never saw a soul. Perfection. Pictures do not do it justice, but it was so amazing: 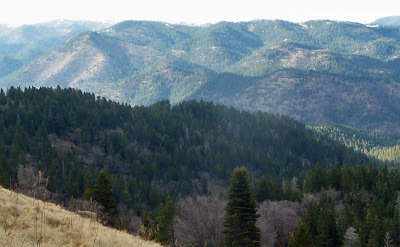 It was pretty cold when we started out, but before long, I began shucking layers. I didn't trust these signs. 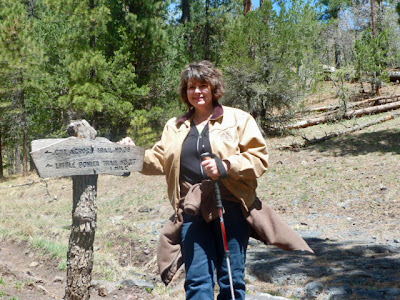 Thankfully I had my handy dandy boy scout with me to guide me: 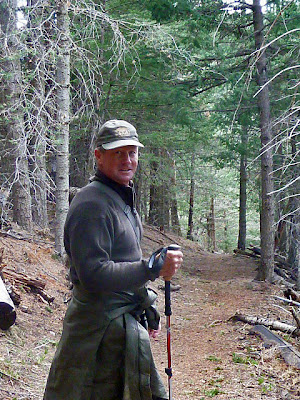 If I could find a  spot to plug in my sewing machine, you could just leave me here: 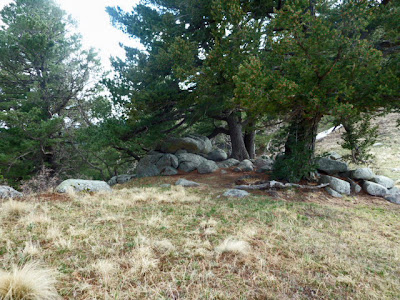 This is what the trail looked like in many places. I put my walking stick to good use. 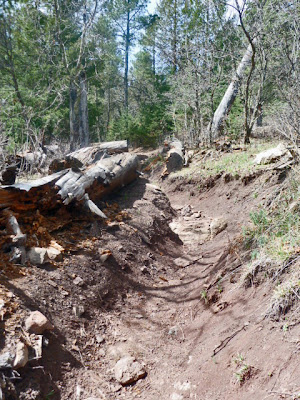 Alas, responsibility called and we had to head back to the flats. DH's phone started ringing as soon as our phone's came in contact with a signal and he had several messeges. Sigh. This is why we don't get away more often. We ducked into this little cafe for a bite to eat in Capitan just as they were about to close: 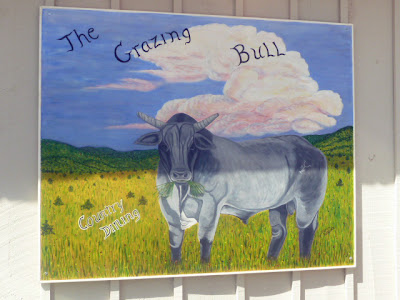 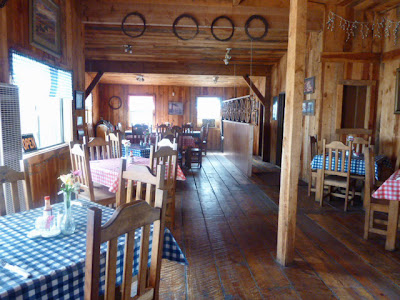 The food was really good too! Our great escape was a huge success and here's hoping it won't be another 12 years before the next one!
Posted by Ranch Wife at 8:58 PM 14 comments:

Labels: When we leave the dirt road

Baby Jungle Quilt is a UFO No More

Crossing off another UFO. Yay! Now that my cross stitch project is finished I can turn my attention to some of these projects that have been languishing in boxes for far too long. I don't even remember when I started this quilt. I'm thinking early last year, or it's entirely possible that it was 2010. I'm much better now at recording the details. All it lacked was the binding.


I found the pattern in one of the quilting magazines and I cannot for the life of me find it to give proper credit. I'll keep looking and if someone recognizes it, I would really appreciate if you drop me  a note. It measures 32x36. Smaller than I like, but I love the pattern and will definitely be using it again although I'll make it bigger. If I can find the pattern! :)


I had Jackie quilt it for me and she quilted a fun aztec-ish pattern in this playful variegated thread. I backed it with a simple blue mottled piece of fabric that I had in my stash.


and wish I had used that on the back, but all in all, I really like this little quilt. It's just waiting for a little baby boy.
Posted by Ranch Wife at 5:42 AM 16 comments:

I finally added the last stitch to Little Bit! I am elated! I am ecstatic! I started this 'little' project last year, but I set it aside in March and didn't pick it up again until this January and as you know, I have been a woman on a mission. Well I finally came up for air!

DH asked me how many hours I had invested in this little guy and I just gave him 'the look'. I haven't a clue and I don't want to know. Let's just call it 'umpteen'...x 10. So here he is in all his finished glory: 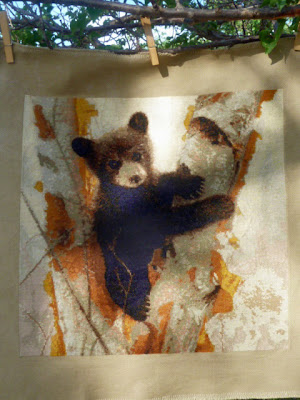 I'll bet y'all are tired of seeing him too. This is the biggest cross stitch project I've ever stitched. He's 16"x16" and it's solid stitching.
I may or may not have jumped up and broken into the Snoopy Dance. Cue Peanuts music. Next time I head to town he's coming along for the ride and  I'm going to have him framed. Actually next time will probably be tomorrow. Just need to wait for a phone call from Jesse at the Seed store. Then I'll be taking a bear to town and bringing back baby chicks. Yay!

I've been working on him for so long that I feel kind of lost tonight. However, breakfast is at 5 am so I would be wise to turn in early. Probably not a good idea to pull out the next project tonight.
Posted by Ranch Wife at 8:52 PM 13 comments: