I cook a lot and I collect a lot of recipes. Even so, there are times when I get into a rut and feel like I cook the same thing over and over. I'm always on the lookout for new, tried and true recipes to add to my collection and through the years, my friends and family have been proven sources for the recipes that make it into the cookbook so thanks to all of you who have shared your treasured recipes with me through the years!
Monday was the first day of our Fall Works here on the ranch and I've been spending a lot of time making menus and lists. So food related posts are what you get.

I have a number of cookbooks although I have narrowed them down considerably in recent years. Then, the other day I tried a new cinnamon roll recipe from a cookbook given to me by a dear friend (miss you C!) almost 20 years and it became an instant favorite so now I am afraid to let any more go. 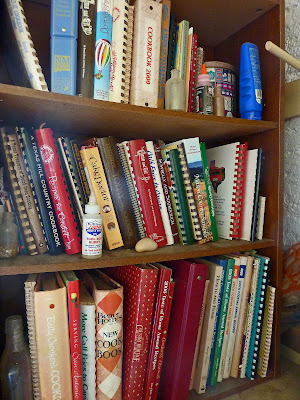 I also subscribe to Taste of Home and I used to subscribe to what was once called Quick Cooking. However, in recent years, I've noticed a change in their pages. I still find some keepers, but I've been disappointed lately. Seeems they have 'improved' their magazines and in doing so, they lost something along the way. We just don't have much call for bean sprout casserole out here.

Then I have this box where various recipes have been tossed to try. In years past, DD and I have had some fun just opening the box and blindly selecting one from the ever increasing pile and giving it a test run. 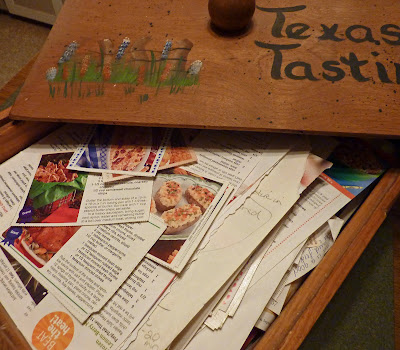 Then there is this: 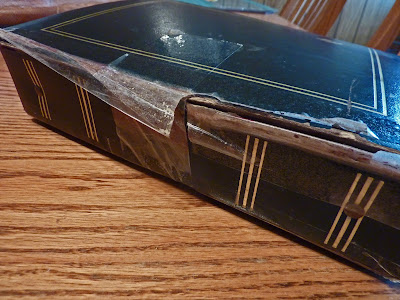 Yes, this is my recipe book - filled with my family's favorites. However, its seen better days and I decided it was high time to give it a complete overhaul. New notebook with more space and lots of pages. I was even going to make a cover for it and call it "Recipes from the End of the Dirt Road", but I was vehemently overruled and told in no uncertain terms that the book was not to be tampered with. (Let's see if I can leave that preposition at the end of that sentence). Apparently my poor, worn, little, black book brings about strong feelings of affection and possessiveness amongst the members of my family.


DD informed me that it was perfectly alright for me to make another recipe book, but the original must stay untouched. I'm not sure if I'm ready to tackle rewriting each and every recipe though so I suppose I'll just flip to the batter stained page that lovingly cradles that Pea Pickin' Cake and mix up something tasty.

As for what to do with all the recipes I still wish to include because there isn't a smidge of room for any new additions, I haven't a clue. I've got loose pages haphazzardly stuck in the back and they are rapidly taking over: 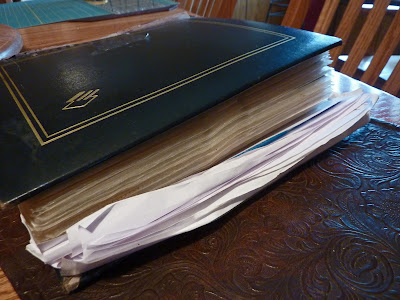 I'm thinking this will be a work in progress and I really should find a way to duplicate that old book so that the kids don't fight over it when I'm gone. At the rate its going, its already in two pieces and the packing tape is the only thing keeping it together. Even the duct tape wore off somewhere along the line.

You know, come to think of it, this book holds a place in my heart too. What I wouldn't give to have a book like this from my Mom or Grandmother. Lots of memories in these pages.

I'm glad that the kids have such fond memories of the times we have spent in the kitchen and around the dining room table while they were growing up. Its funny how a little tattered book can elicit such strong emotions, but it makes me happy that it does. Not bad for a gal who couldn't cook when she married over 23 years ago. 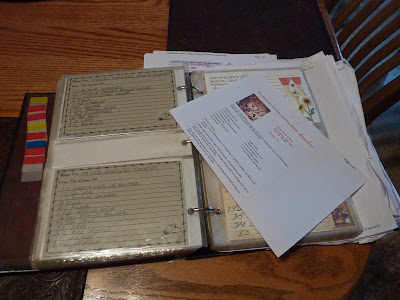 The book stays.
Posted by Ranch Wife at 4:49 PM

Karin, I think maybe you SHOULD try out a bean sprout meal to your menfolk...I'm sure it will be a hit :) lol I've been thinking about making DS and DD a recipie book of their own to take when they move out. DS stole a couple of my cookbooks, and I need them back! I keep looking at different ways to keep recipies. I just can't decide what to do, and like you, the work involved overwhelms me! Maybe we need to work on this together?

Love this post. :-) I have been trying to figure out how to organize my personal recipe book too--because it's gotten to the point where I have so many stacks of different sized papers in it that I can't find what I want when I want it. Currently I'm leaning towards a binder devided by category, with sheet protectors in different sizes for cards and 8*10 papers to suit whatever I have written out on different sheets or cards. I'm jealous of your bookshelf with all the cookbooks! That is something I collect, for sure. :-)

Great post...I love cookbooks too...and recipes...and have trouble weeding any of it out...even though I have never made a lot of it! I so enjoy reading thru them and imagining I'm going to cook those things. Sigh. Good Luck on the Re-organization...:)

Shelljo - I might get fired if I served bean sprouts around here. I think the donuts I made for them this morning are a better choice. Wish you were closer - I would love to sit and exchange recipes, and yes, in your spare time (LOL), we should pull something together.

Naomi - I'm leaning towards a binder as well. Mine has served me well, but I need something larger. However, asfter all of this cooking lately, I think my recipe book and I need some time apart.

Cow Pies - welcome back! You have been missed! I too have a lot of recipes that I hope to try 'one day'. Just seems like we fall back on the tried and true ones most of the time.

My sister and I have our mother's and grandmother's book like that. My sister has my grandmother's tattered book, and I have my mother's Better Homes & Gardens book, and her little red recipe box full of her handwritten cards. Given that they're both gone now, we find them great comforting treasures. I recently made cookbooks for both my daughters with recipes handwritten by me of our old-time family favorites so the tradition can be passed on. I think the book should stay, but I, too, would be tempted to start another. Why can't there be 2?

Shelly - you're right. We'll just have 2. Hopefully I'll be a round long enough to tatter another one! How blessed you are to have your Mom's recipes like that! I have been tempted to type all of mine out, but I think that one's handwriting evokes so many memories.

Karin, I'm just lovin your blog! When I ran across this post I thought of Blog 2 print. Perhaps when you are orginizing all of your recipes, you could type out and post them onto the dirt road scrapper recipe blogspot. After all of your recipes are in, have them printed ini their own binded book. Great legacy to give to the off spring, the grandchildren besides the children. Just a thought.

Jane
Here's a link to my blog when I first tried them out:
http://quiltsmiles.blogspot.com/2011/09/came-in-post.html