I am making slow but steady progress on my UFOs without adding too many more to the bottom of the list. This quilt was at the top. I am embarrassed to admit that DH and I chose these fabrics in 2010 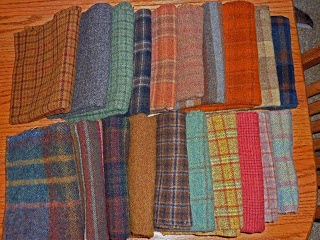 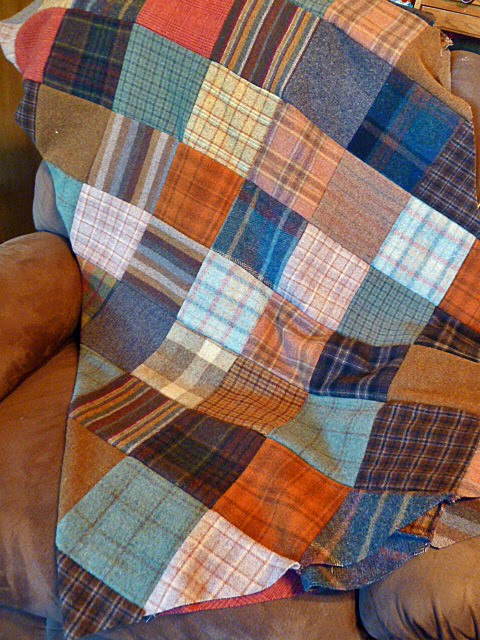 and I ordered wool batting last year and then spent some time on my hands and knees: 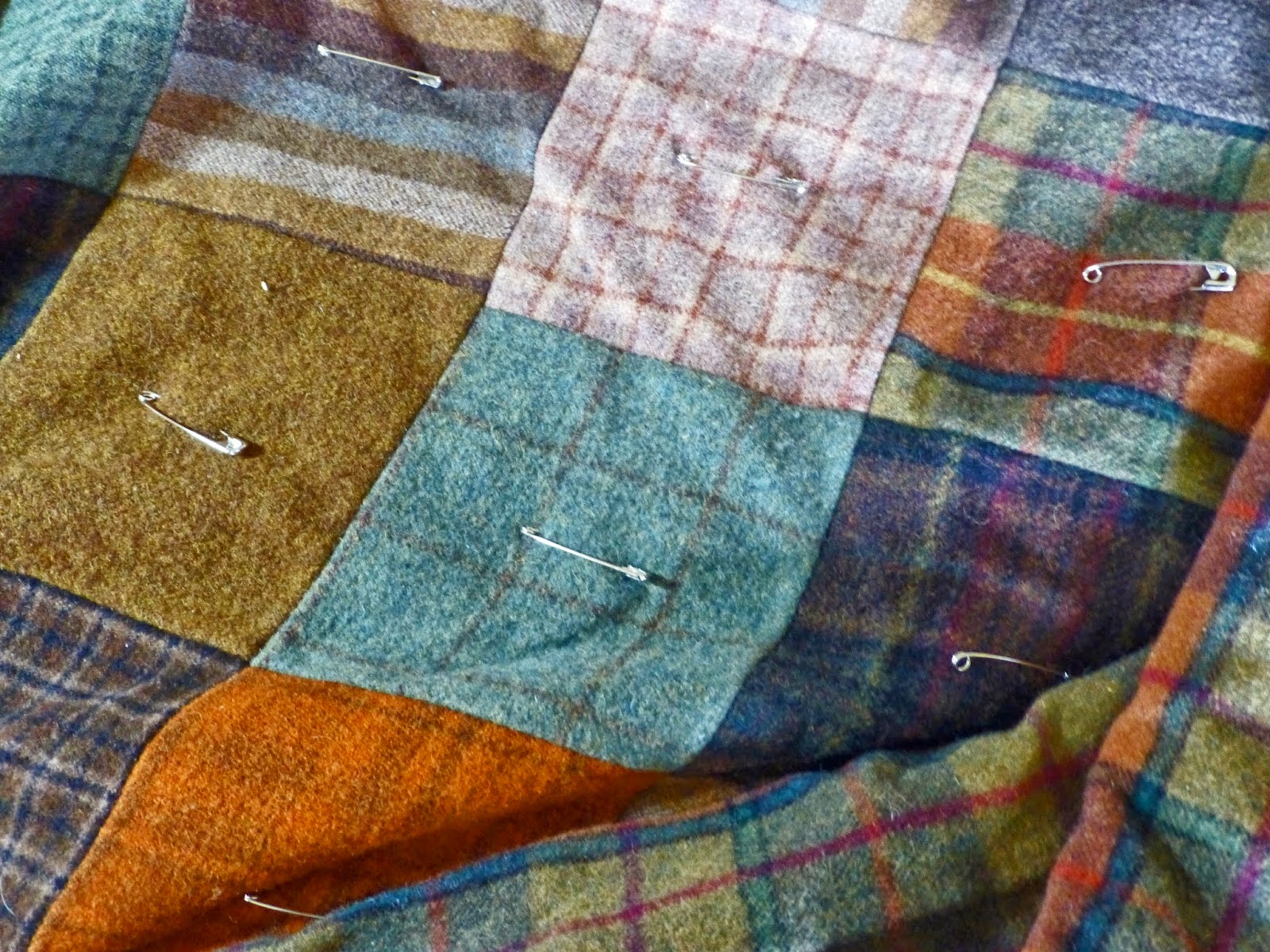 In December, I set to quilting it. The NFR (National Finals Rodeo) allowed me to make good progress on it. 10 nights of championship rodeo and DH's quilt was quilted! 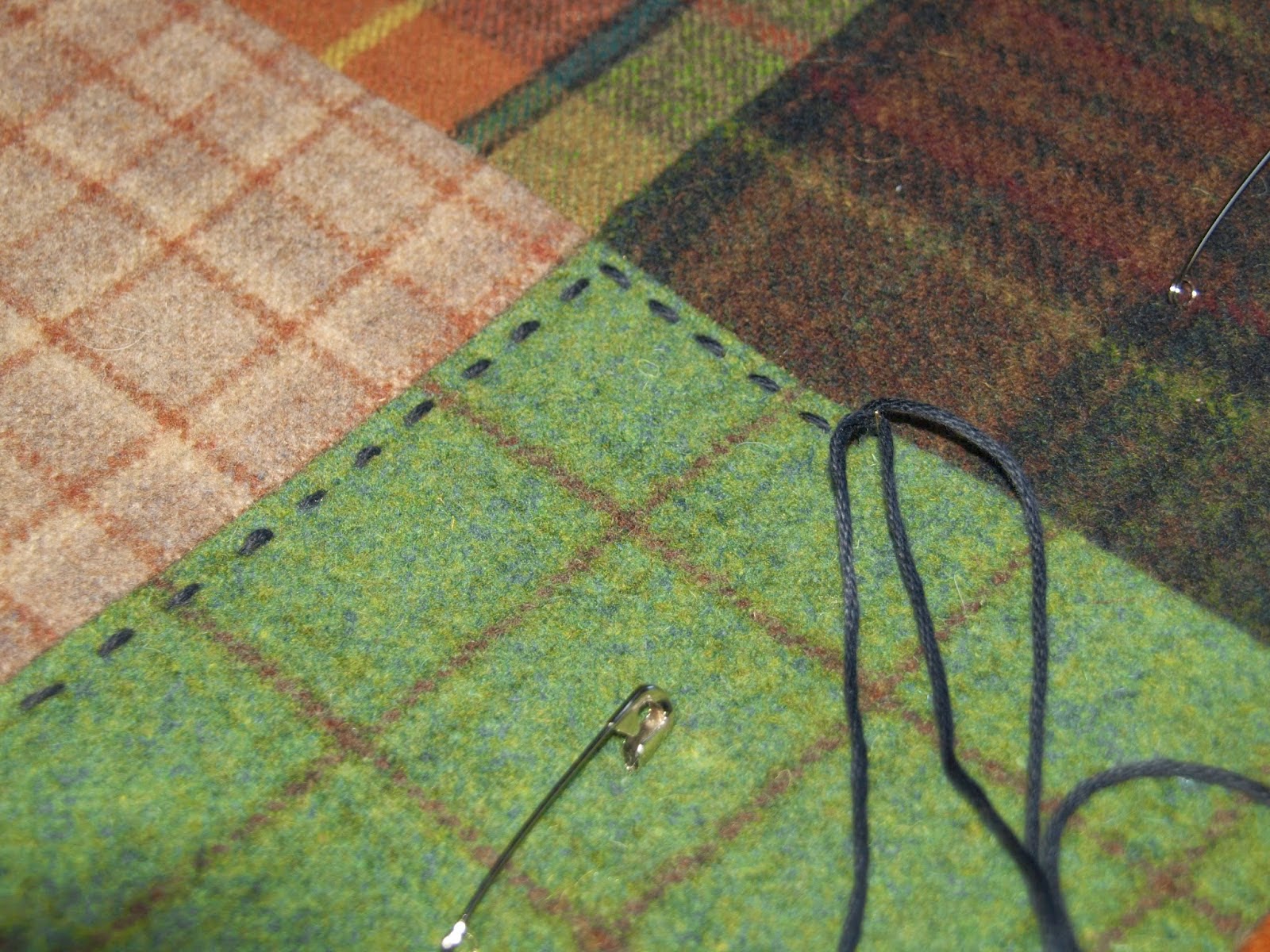 My only regret is that I didn't make it bigger. I seem to do that a lot...talk about making bigger quilts. It finishes at 70 x 70. 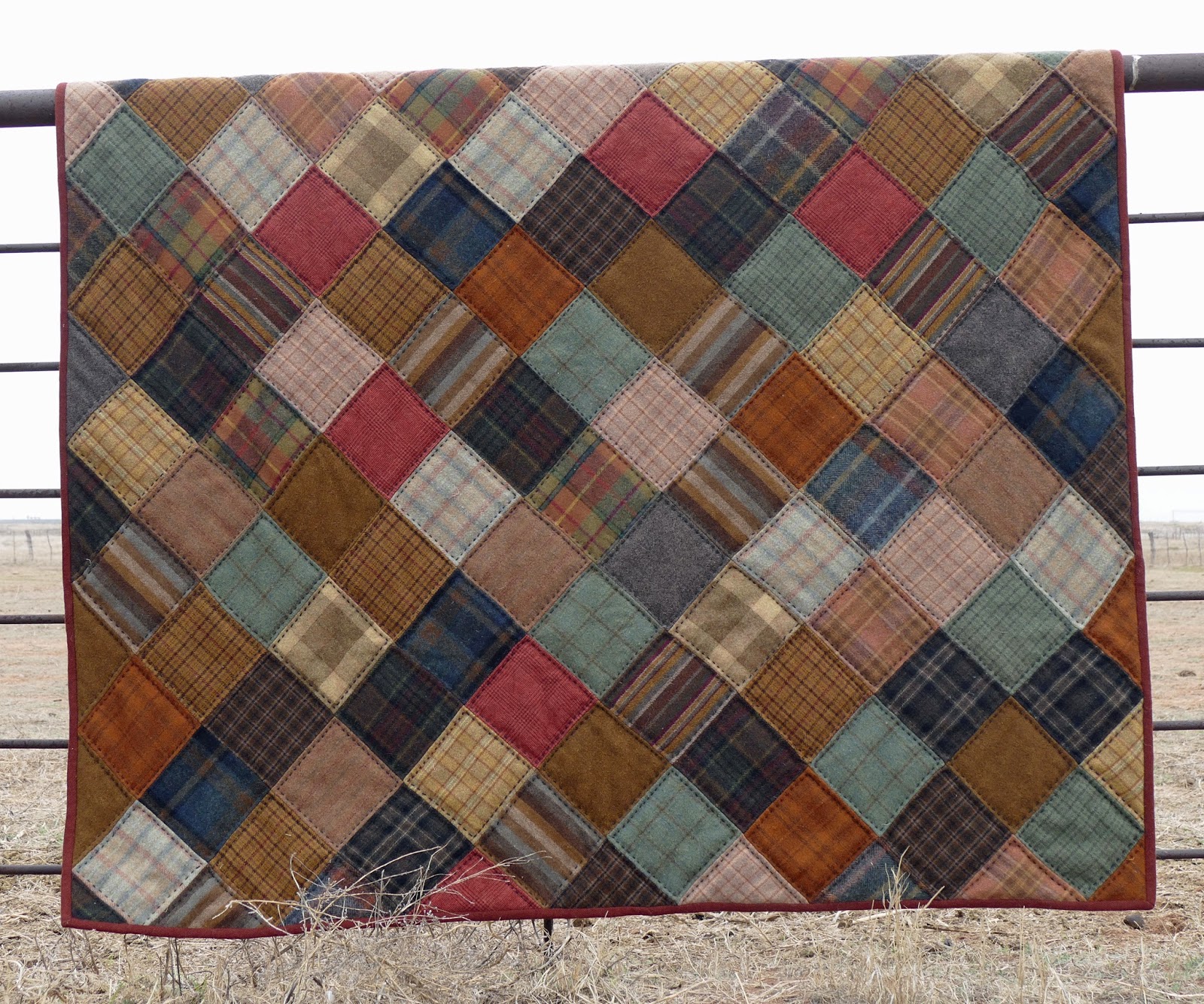 I hemmed and hawed over a quilting design, but DH asked for simple. No swirls or doo-dads. No brands or western motifs. Simple. Unassuming. I asked several times while I was working on it and the answer was always the same. 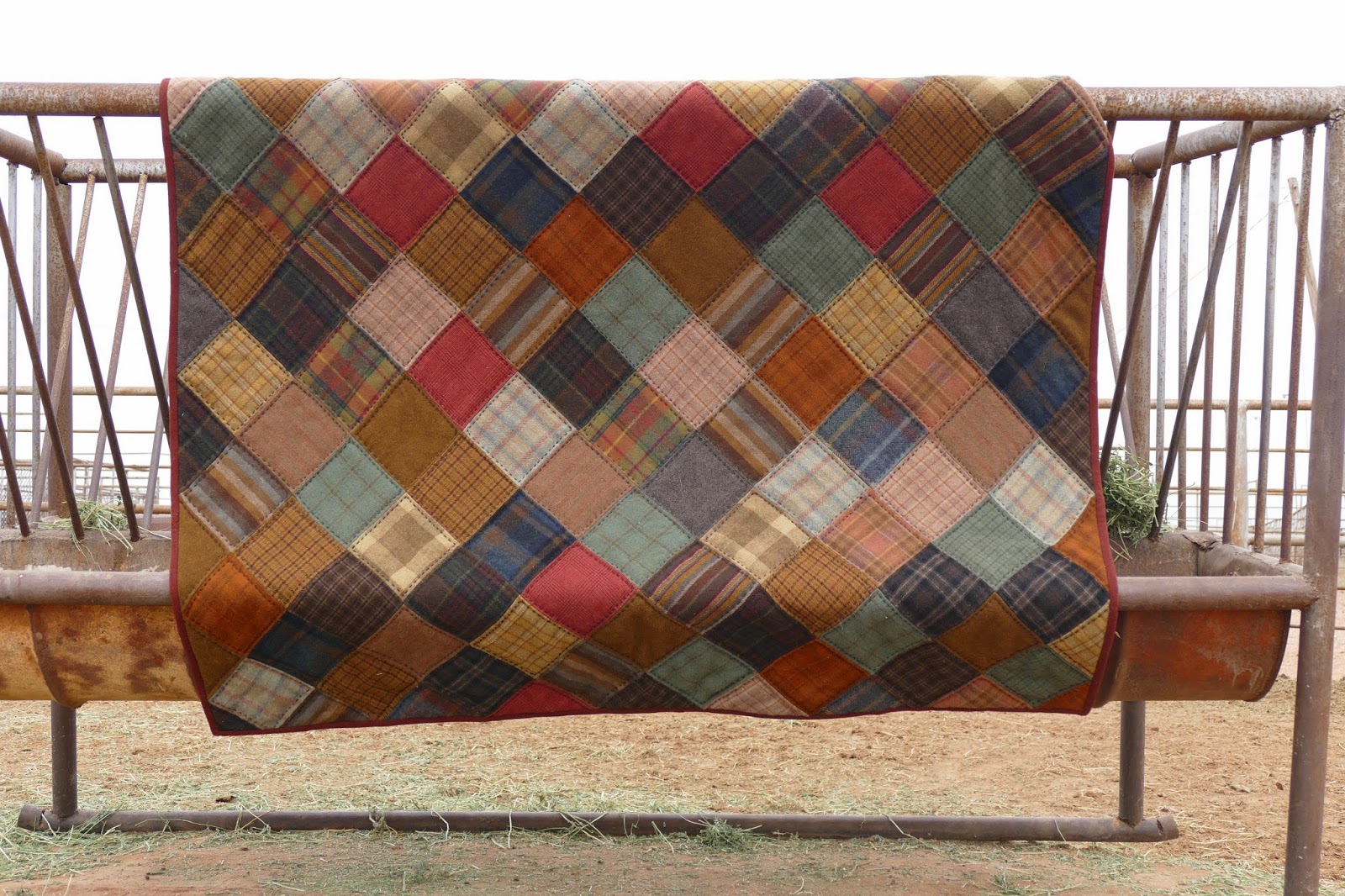 As I was finishing up the squares and about to move onto the triangles on the edge, I realized I was going to run out of the yarn I'd been using. A quick search online told me that it had been discontinued so I called the store in Brady where I originally purchased it probably 3 years ago, maybe more. They had expanded and opened another store in Fredricksburg and moved all of their wool, and much of their yarn there. Phone call #2 brought success. Yes, they had the yarn and they were kind enough to send it to me. I also needed some wool for the binding. 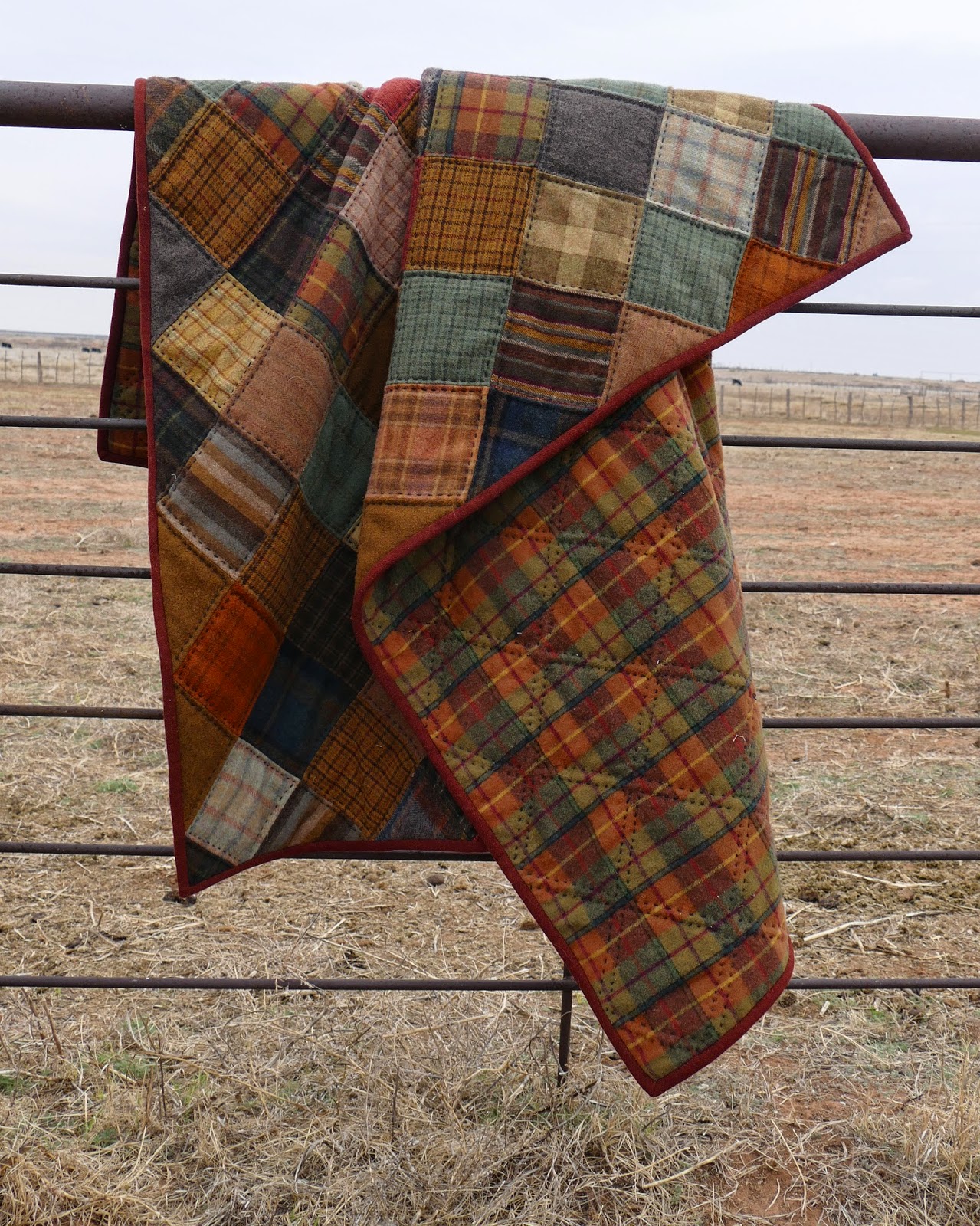 I gave DH the quilt at Christmas, but it lacked the binding so I stopped into the shop when I was driving through a few weeks ago and chose wool for the binding. 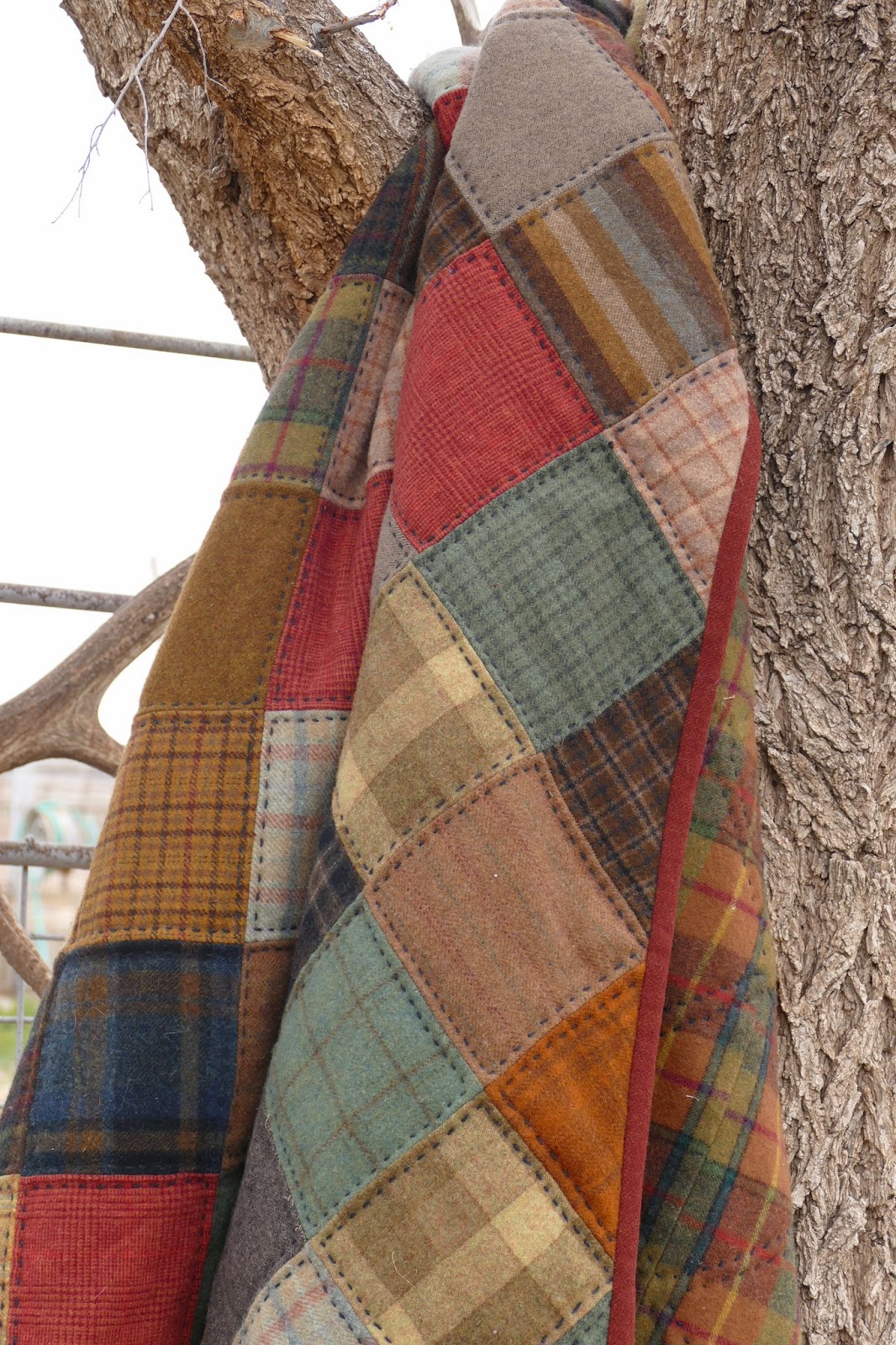 They have a wonderful selection of wool and I will admit to hovering over the bolts and contemplating another wool quilt. However, common sense quickly prevailed. It gets cold in New Mexico, but unless we move to Alaska or Tibet, I'm fairly certain we won't be needing a stack of wool quilts. 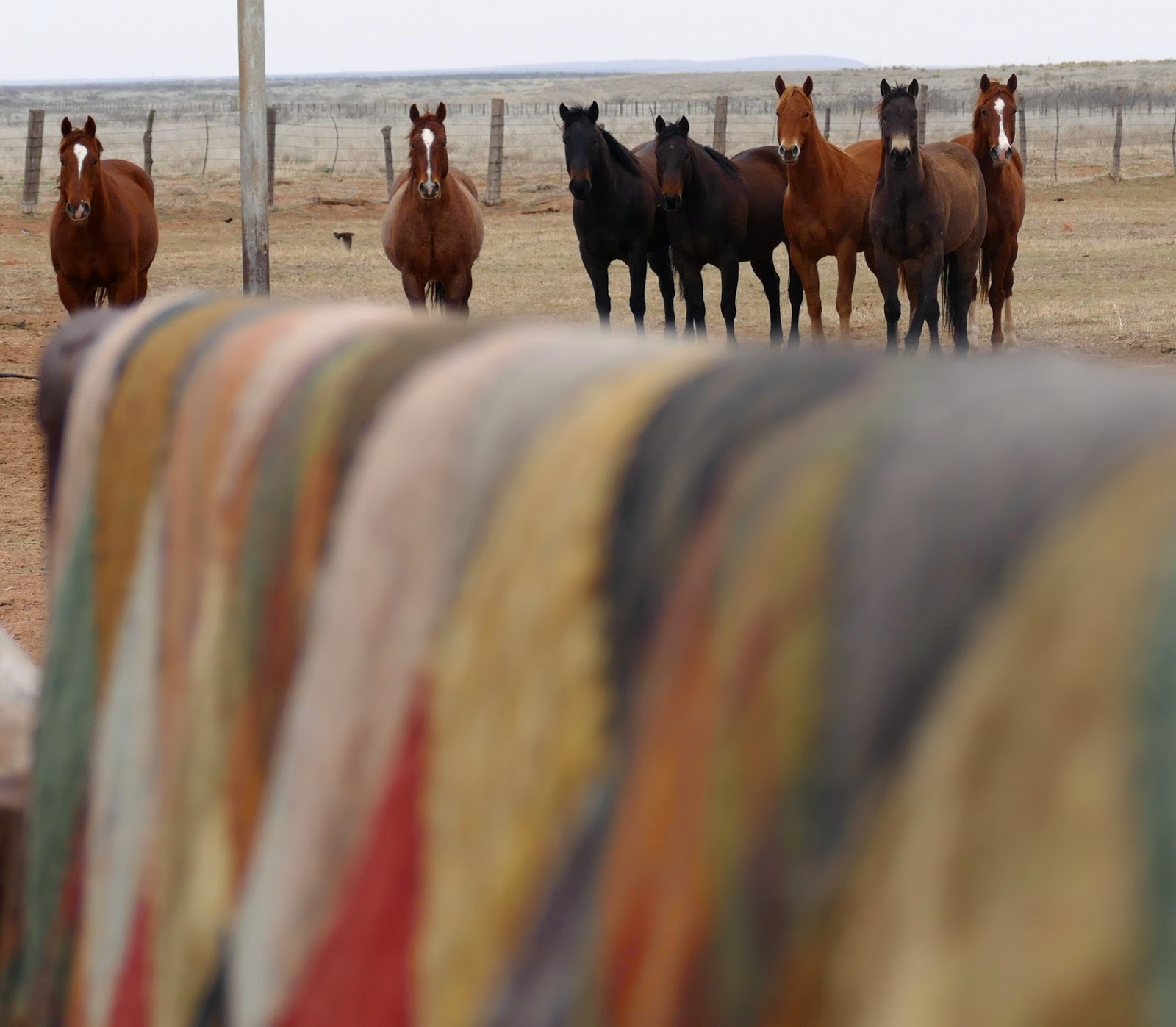 Once I was back home, stitching commenced, but the double fold binding I always make was just too thick so un-stitching took place. I had already hand stitched down one side. I kept asking DH what he thought and he didn't want me to have to un-stitch it all, but we both thought the binding was awfully thick so I took it all off and trimmed down the binding. Now that its finished, I'm glad I did. Much better. DH loves it. When I had added the last stitch, clipped the thread, and presented it to him, he commented, "Just in time for our first 80 degree day!" Rascal. 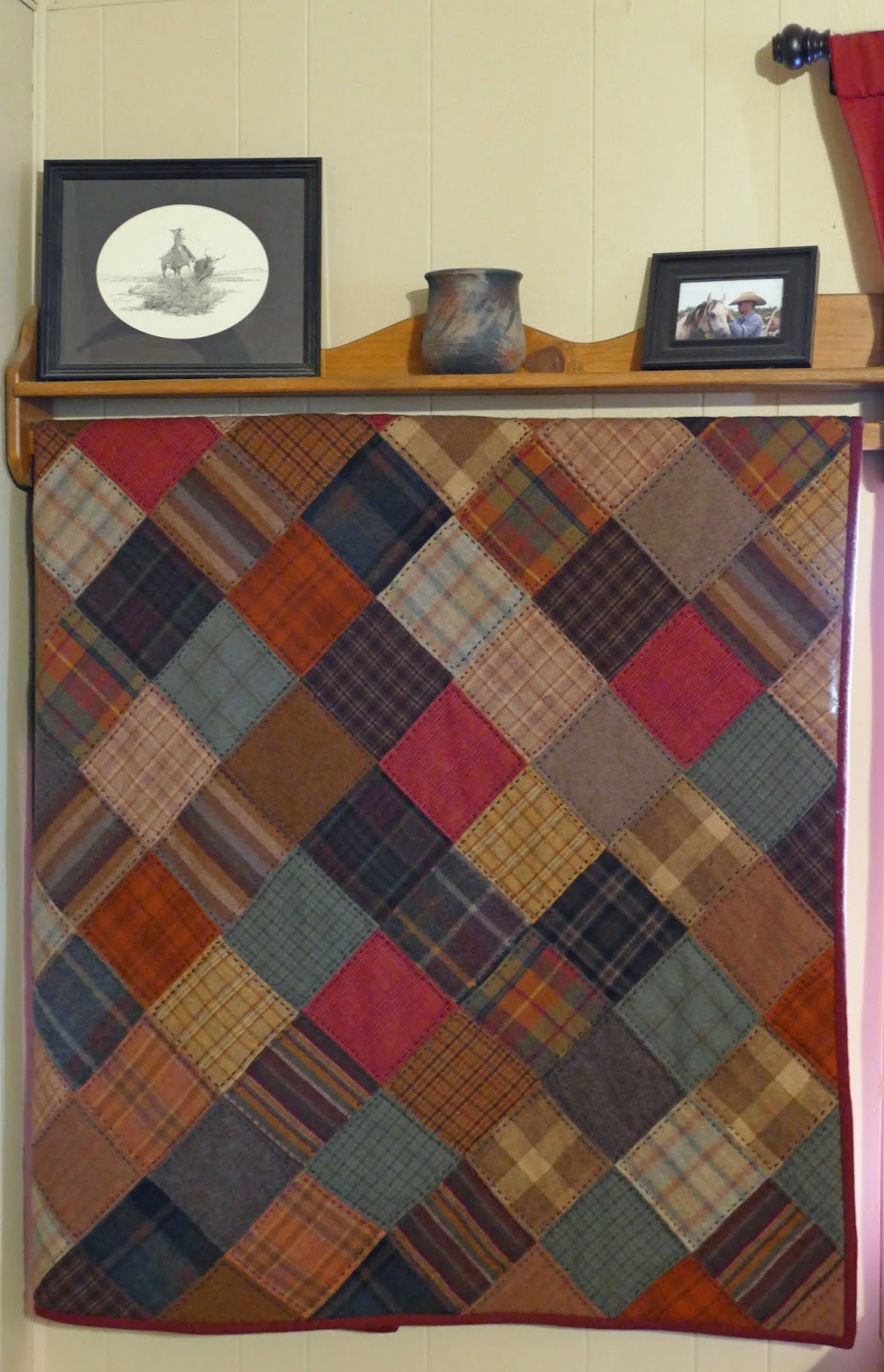 Oh WOW!! This is a wonderful quilt!! What thread (yarn??) did you use to quilt it? I'm really amazed -- did you press your seams open? Did you use 1/4" seams? The method of quilting you used makes each of of the blocks stand out so nicely -- it was the right way to go! Maybe you need to do a wool quilt tutorial??!! :)

Love it!! Looks so cozy and the simplicity of the quilting near each seam makes a nice 'simple' design like he wanted. You do good work, girlfriend, even if you are sloooow....LOL!!!!!

I agree. Also, did you use new wool or recycled wool.

You made a beautiful quilt! I love the colors you used. Hugs,

I'm not a quilter but I do recognize beauty and wonderful work when I see it!!
I have friends who do quilt so they keep me in the quilting world!

It's beautiful. I like the simple design: it allows the fabrics & your quilting to work together. Nicely done!

Denise asked some of the questions I also pondered.

Love the quilt! Perfect wool for the back. I second a tutorial.

Howdy Karen Been having some computer issues my internet provider changed up some things and I couldnt leave a comment! Could on some other blogs but not yours for some reason! Been reading all your posts and enjoying them though.Hope this will work this time! Also,the border collie tangled with the laptop and its been to the dr and has to go back!New email due to the internet changes

Beautiful! Not only are the colors great, but you placed them so each color stands on it own. L♥ve it!

Karin, this looks like the perfect quilt to delight a man. The colors are warm and inviting and they all work so well together. Your stitching looks so even. What kind of thread did you use. And what kind of batting? It almost looks like maybe there's no bat or it's a thinner one. Gorgeous!

I love everything about this quilt. I want to make one ... only larger. All wool, wool batting, yarn quilting ... no swirls or doo-dads ... simple and unassuming.

It gets real cold ... and is still real cold ... here in New England. We coulda used a stack of these warm quilts this winter. Next year I am going to have at least one done.

Thanks for being simply inspiring ... :) Pat

Beautiful Karin. Simple and elegant. I bet that is warm too! Great job on getting it done.

Really enjoyed reading the story of your wool quilt. I'm sure the photos don't really do it justice but it is wonderfully beautiful.
Now sorry, I gotta ask cuz I know zero about wool. Did you pre-wash the fabrics and wool batt? Will it shrink when washed? LOL- surely you are an expert on wool by now. Oh, also I have a flannel quilt that I would like to use yarn for the quilting. What is the yarn you used? As someone else said, perhaps a tutorial is in order. (Ducking and running here).

Nice finish. Thanks for being honest about how long it's taken you. Makes me feel better about some of my projects. Ahem! :-)

So funny about it being ready for warm weather. Sounds like something I'd do, or maybe even will do soon! :-P :-)

OH, this is just lovely! I've never worked with wool like this, and have always been a bit afraid of it. Just love the way you quilted it--what a perfectly lovely quilt!

I love the colors that you used for this wool quilt. The different colors on these flannel and plait squares looks really good with the reverse side. The red, yellow, and blue stripes on the other side makes a good lining underneath this quilt. Thanks for posting this!
http://www.luxorlinen.com.au/wool-quilt_1

I have a lot of wool squares that I want to make into a blanket for my brother. Did u hand sew the squares together or machine? And, 1/4 inch seam if you dd machine sew or a wider seam? Your quilt is a beautiful treasure!!! Thanks. Sandy :)

Hi Sandy - Thank you so much for your kind comment. You are showing up as a non-reply blogger so I will answer your question here and hope you will see it. I machine stitched the squares together, and I'm afraid I can't give you a definitive answer as to the seam allowance. It's been too long and I don't recall if I used 1/4" or a wider seam.

I just want to say how your quilt has inspired me! It is so beautifully simple. It has started me on the path to collect and felt wool in anticipation of somehow making one that might excite me as much as yours has.

Love the quilt. What size are the squares?

Just seeing this beautiful quilt now.... Wish I could see responses to the other readers' questions? How big did you make your blocks please?

Hello! Your quilt si really beautiful. I ´m looking to do one with the whool right from a sheap beetwin two square. I first have to wash it, it is a merinos. Do you have some ideas to help me ? Sorry for my bad english, I ´m french .

Beautiful quilt!!! Can it be washed or is it dry clean only?