Catching Up From Thanksgiving

I'm sorry I've been  away and haven't popped in lately. Thank you to those of you who have checked up on me - I am touched by your thoughtfulness. And yes, I am with my mom. I'll post an update in a day or two, but before I left home, I had started this post so I'll publish it first.

After shipping out the steer calves last Wednesday (well - a few Wednesday's ago. 😉 ) and feeding the crew, there was about 2 1/2 hours of daylight left. DH said, "I'm going hunting". It was the last day of his deer hunt and he was determined to make some jerky. We always look forward to a dinner of tenderloin and backstrap and everything else is made into jerky. Our Fall has been so busy that he had pretty much resigned himself to a year sans jerky, but he pulled up in the dark with a deer that evening. Our girl and her fella pulled in about 15 minutes earlier. Kenny jumped right in to help. He's a hunter too and this is how we initiated him into the family. LOL. Lucky for you, I'm at my mom's and I don't have access to the photos of the boys processing the deer. 😉

Kenny brought one of his bird dogs: 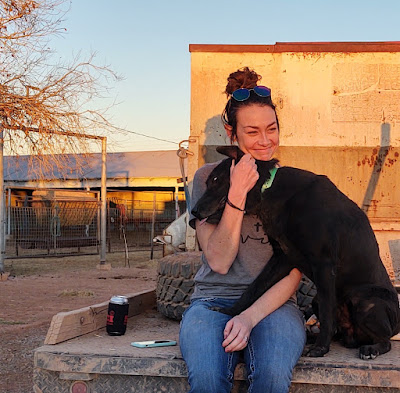 And the kids and DH spent a lot of time chasing quail and ducks. Our girl stayed at the house with me one evening and the boys ended up rescuing 2 ladies with 2 little ones in a car that had a flat. It was pitch dark as they boys headed back to the house and I was out in the pens tending to chores. DH stopped and changed their tire, but their spare was flat as well so he offered to fill it for them at the house. That meant driving down the 2 1/2 mile dirt road in the dark. Poor ladies - they were scared to death. DH said he tried to put them at ease, but can you imagine having a flat 30 miles from anywhere, in the dark and 2 men drive up - with blood on their hands (from cleaning birds) and guns in their truck and say, "Hey - if you follow us down this long dirt road - in the dark - we'll fix your car". DH didn't present it that way, but that's probably what those poor girls heard. They did follow them, albeit so slowly that I'm sure they contemplated turning around multiple times, but they weren't going very far on a flat tire. The boys assured them they would be safe, but of course they were frightened. I think they were somewhat relieved when they saw me walk up. The boys fixed their tires and sent them on their way. They asked DH for his number and he couldn't figure out why, but I told him they probably figured if they broke down again, he'd come to their rescue again. LOL. He said he understood their reluctance, but if our girl or I had been in the same situation, he hoped someone would have stopped to help us. Of course, he'd fuss at us for having a spare tire that was flat. 😂

Our Thanksgiving was filled with culinary delights and the turkey didn't even make the list. My little kitchen was a bevy of activity long before daylight: 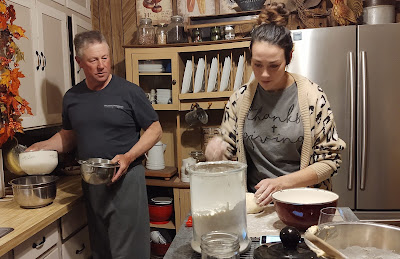 Our girl spoiled us 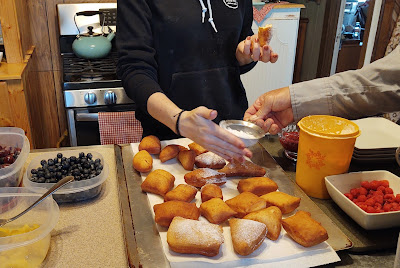 with homemade beignets and raspberry sauce which we foundered on 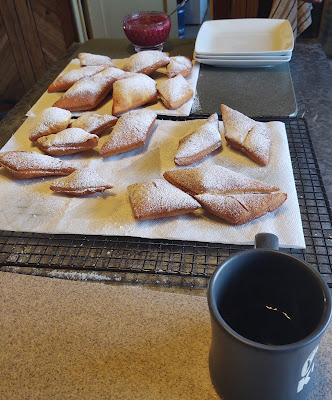 But DH said we had to eliminate the evidence 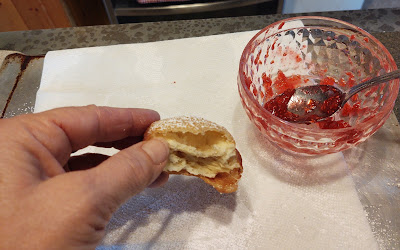 These were absolutely to die for. She made them twice and then, with a belly full of beignets, 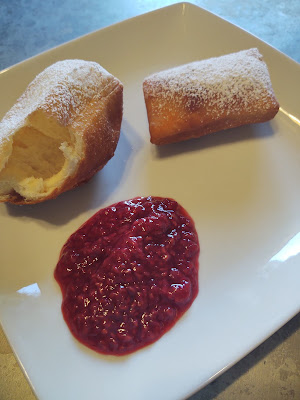 they all headed out to chase quail. This is an old photo, but I don't have any shots from that afternoon. As they headed out, DH said, "I think the quail are gonna win today - I'm full of beignets". 😂 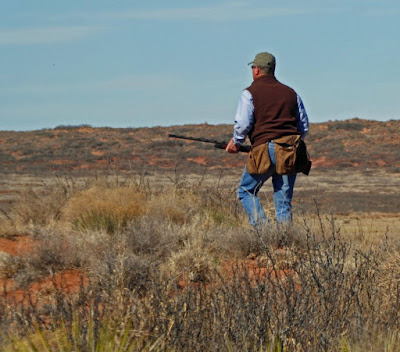 Then it was Kenny's turn in the kitchen: 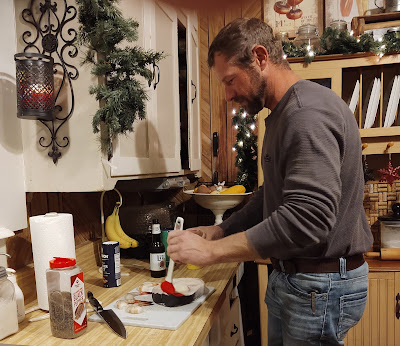 A man in the kitchen always gets brownie points around here: 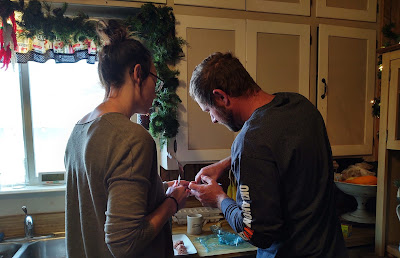 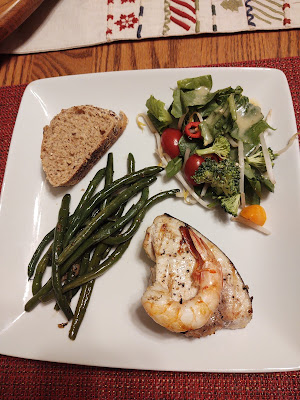 I made the green beans and salad and our girl bought Batard bread at the grocery store bakery. She said at first she thought it was called something else so it made her look twice, but it made her laugh and it looked good so she brought it home and then in true family fashion, we had to research it's origins.
From Google: Batard bread is a variation of the well known French bread, known as a baguette. Although "batard"  means 'illegitimate' and is therefore seen as inferior to a traditional baguette, don't let that misconception divert you from diving into a delicious loaf of freshly baked Batard bread.
It's really just a shorter baguette and this one had a wonderful nutty flavor. You can bet we'll be trying out recipes now.
Next up was this fabulous Pesto-Pasta-Shrimp dish I made: 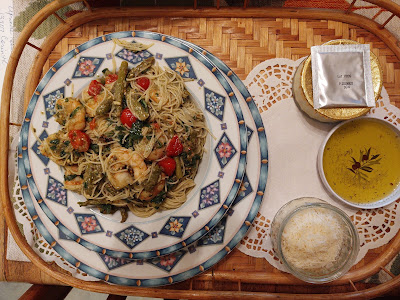 I'll share the recipe soon! It's worth sharing! So good! And we're not done yet! 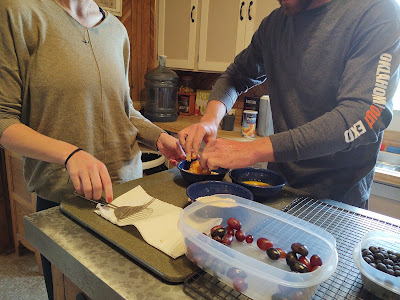 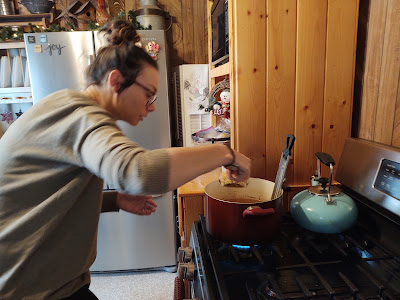 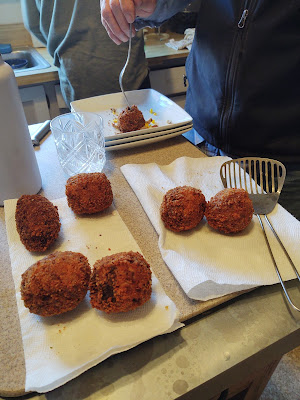 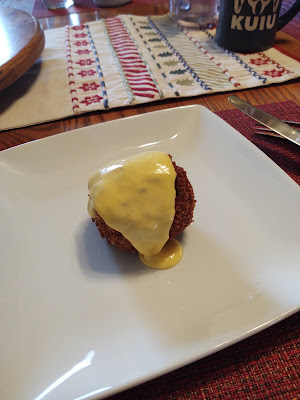 Sorry this picture is blurry. Kenny wanted to make these and they were also a big hit. Have you ever had Scotch eggs? They are a soft boiled egg, wrapped in sausage, rolled in Panko breadcrumbs, and fried. Sorry about the blurry photo: 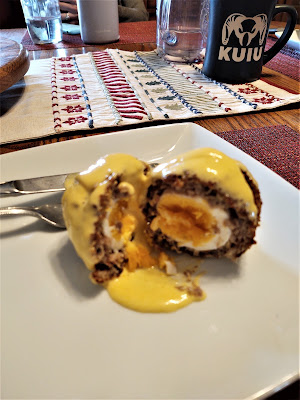 And we have another winner! Although lots of fresh air and exercise are needed after a weekend of sublime cuisine like that! DH told the kids that we now expected them to step up their game next time. That's going to be a hard act to follow! 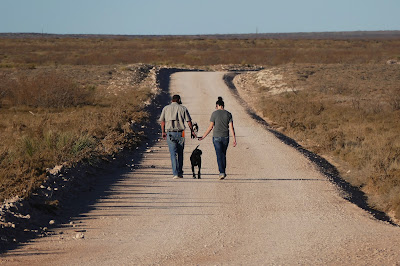 Good morning Karin, glad to hear from you. I hope your Mom is doing well. Looks like you all had a wonderful Thanksgiving. I'm glad those women had some hardworking, trustworthy men stop by and help them out. Food looks scruptious, I've been wanting to try Scottish eggs, but haven't yet, maybe I should do that soon. Have a great day!

Good to see you had a wonderful Thanksgiving! Kenny is a keeper! Praying for you and your mom!

What a lovely blog--I enjoyed every foodie minute of reading and now I am anxiously awaiting news of your Mom. I've had my Mom here in AZ with me for a month--she flies home Wednesday.

Looks like your daughter has found a great guy! The flat tire story is a good one, but like you, I’m surprised the gals followed them down the dark road.

Oh, my! I sure hope she's keeping Kenny! And his sweet sweet doggie!

I was pretty sure you were at your mom's. Sure hope she's doing OK. Looks like a good time was had and a few pounds gained. HA WOW, did those two set the bars a little higher or what?!!! I'm wondering if they're going to open a restaurant somewhere.

Oh, my!!! Love beignets as they are as southern as I am!! Glad you got to visit with your daughter and friend! Do love a guy in the kitchen!! Hey, girl, wipe the powdered sugar off your mouth!!! Merry Christmas to you and yours. Prayers for your Mom’s comfort.

I love Scotch Eggs but I grew up using hard boiled eggs. I've never heard of using Hollandaise sauce, an interesting idea. I grew up in Scotland where these are standard food and I make them often for my Canadian friends now that I live in Canada.

Thank you for sharing your Thanksgiving with us! How fun to have other people cook tasty food for you. A 2 1/2 mile drive down a dirt road in the dark, yikes! But what a wonderful memory in the end.
Take care, best wishes for all!

What a lovely family gathering! I hadn't heard of frying Scotch Eggs - I bake mine in the oven - 350 for about half an hour. You can cook them all at the same time that way. Merry Christmas and a Happy New Year!

So enjoyed this story of your daughter’s visit! The photographs say so much too. I can just imagine the fear those ladies with the flat tire must have felt. Little did they know how God was taking care of them and their little ones. Look forward to seeing how “the kids” step up their game on the next visit! Hope things are ok with your mother. Take care.

I was getting worried about you and glad to read something finally. Kind of an addiction...love the blog. Sorry about your mom/condition. Thank you for sharing your interesting life with readers. Happy Holidays

The Scotch Eggs sound tasty - will have to try them. I so enjoy your blog! Merry Christmas from Kansas.

I haven't had Scotch eggs since my grandma made them for us - sometime in the '90s. In fact, I think that was the only time I ever had them. :-) Looks like you had a good Thanksgiving. :-)

I honestly think I would have refused help in those ladies' place. The way you describe it is probably exactly how I would have seen it. :-/ :-D But then, New Mexico does have some pretty empty spaces. Better to make sure everything is in order just in case. ;-)

Praying for you, your family and especially your wonderful mother. Peace be with you.