Tripping Around the World Western Style

The binding is complete! Sound the trumpets! Cue the angelic choir! And then commence with the Snoopy dancing! To say that I am ecstatic does not even come close. Like many of you, I spent more time in front of the TV soaking in the Olympics than I have in the entire 2 years since the last one! And I stitched. And I stitched. And I stitched. Suddenly, the first stitch met the last and I was left with no stitches left to stitch. Then I jumped up and threw my arms into the air in triumph! DH was walking through the living room and asked who won a gold medal. Well that would be ME of course! I just bound the hugest quilt ever!  I know that Saska bound one as well, because she made one here and it was Saska that convinced me that I needed to make mine bigger than I had initially intended to. It's huge! She calls it a wagon quilt because it's big enough to cover a covered wagon! LOL. It's 123x135". Yep, I think Wagon Quilt describes it pretty well don'tcha think? 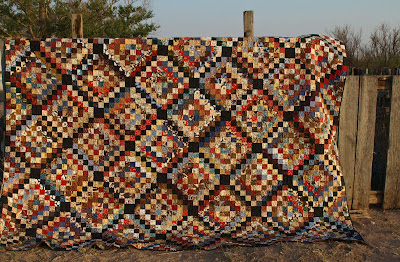 There are 100 blocks in this one...3600 2 1/2" squares to be exact, but who's counting. This is Bonnie Hunter's Many Scrappy Trips pattern. Here's the link to the tutorial. I used every western print I had and I still have a big container that won't close, filled with those prints.

So the other day I gathered it up and hauled it out for a photo shoot. Don't cringe. I make quilts to use and they had better be able to withstand a little ranch dirt every once in a while. 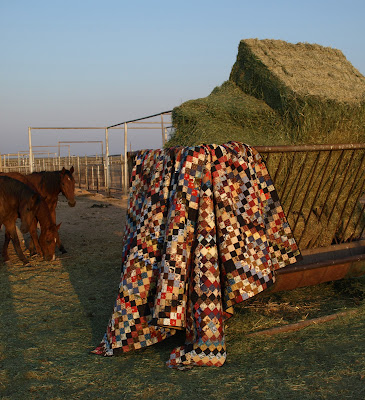 The horses heard that the chickens put their 2 cents worth in on the Scrap Jar Star top last week and they were having none of that. We're an equal opportunity ranch around here. 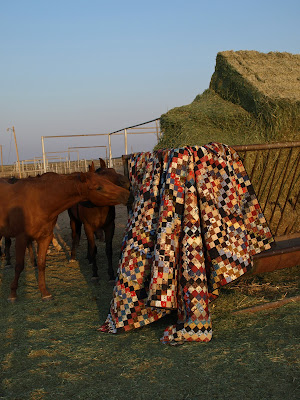 This colt has a nose for a good thing when he sees it: 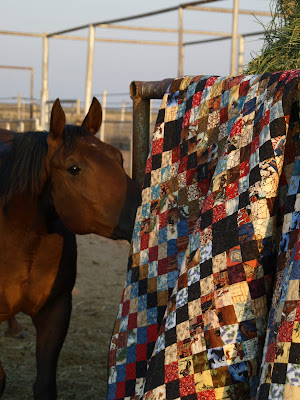 This quilt is worth it's weight in gold. So is that hay sitting there. Can you say ouch on the price of hay right now? 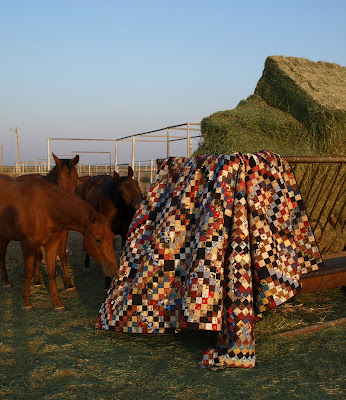 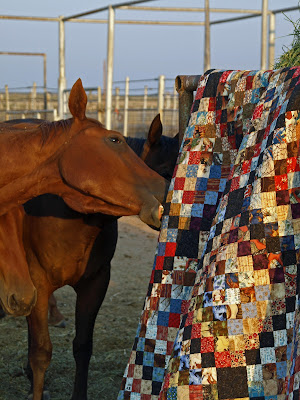 This was not an easy picture to take. I'm telling you! There was ladder scaling ... and  hay climbing... and rock hauling (which was unnecessary since I was able to tuck the top of the quilt into the baling twine) . And yes, I did it without help which is why there are no pictures to tell of the tale...which is probably a good thing. DH was away and I was washing sheets and I thought...how hard could it be? 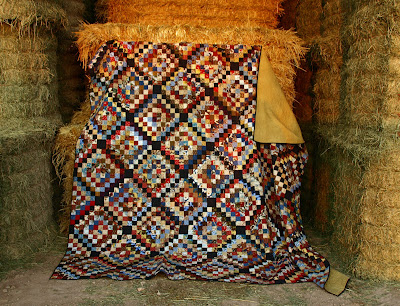 When that thought pops into my head, I should heed it as a warning, but do I listen? Nope.  I worked up quite a sweat and then DH admonished me for not waiting for him, but the sun was setting and I was going to lose the light. He's heard that before.

We have a king-sized bed, but it sits up high and we have a really thick mattress so this quilt is just right.


It's crazy heavy though, but I wanted a warm, heavy quilt and a warm, heavy quilt is what I got. Right now, when it's still 100+ in the afternoons, it's a bit much, but we just fling it to the foot of the bed at night and every morning, when I make the bed, I get a workout, but it makes me grin every day.

I am so excited to finally have a quilt I made on our bed! Those 3 little pillows look kind of lost though. I think this calls for some big tone on tone pillow shams. I thought about fringe, but I'm not really the fringe-y type although I just happen to have a whole lot of black piping that didn't make it's way into a previous project...

Now I really need to do something with those walls. Sigh. Anyone up for some home improvement?
Posted by Ranch Wife at 4:17 AM

That is one amazing quilt! I can see why you did some dancing and waving at the end. Truly beautiful and something that will be a joy in your life for many years--drought, hay prices and all.

Oh, Karin, it is absolutely wonderful, wonderful, wonderful!! I've always love trip around the world quilts - now you have inspired me again!!! I really am going to have to stop reading your blog - my "going to make that quilt" list is getting out of control!! Oh, by the way - I may just have to raid that cowboy fabric stash - they are lovely!!
BTW - super nice looking colts!! Breeding?

I am blown away by the awesomeness of this quilt!!! And I bow at the feet of the master who bound this behemoth! Simply wonderful! I thought I made big quilts but you put me to shame. Sooooo much gorgeousness. And it is clear to see that the horses on your ranch have the same good taste as the chickens. You do deserve a gold medal for this achievement. Hugs!

Love the photos of quilt with the horses and the hay.

Holy smokes, woman, that's one BIG and Beautiful quilt. It looks awesome on your bed.

That is one beautiful quilt, Karin! All the pictures are fantastic :)

That is one beautiful quilt, Karin! All the pictures are fantastic :)

Goood GIRL!!!!! That looks wonderful and I know you are excited to be finished with it. Looks wonderful on your king bed, too. And you are moving on to what???????? Inquiring minds, you know!!

OMG! That is one BIG and BEAUTIFUL quilt! I can't even imagine sewing one that large. Just amazing! I love it. It looks wonderful on your bed.

This is gorgeous! Love the photos too!

This quilt is fantabulous and it looks awesome on your bed. Even with the pillows - the pillow colours match so well. Fabulous work! How did you quilt it?

Love it!! Love it!! That is one big quilt, but beautiful. The binding would have been fun, but handling and quilting it would have been a chore. How did you quilt it?? It looks wonderful on your bed and the pillows look good too. Now I want to make one of those too -- only not quite that big!!

Soooooooo...aren't you glad you listened to me??!! haha
It's a beautiful accomplishment. One that you will treasure. So proud of you for getting it done!

Wow that is one awesome quilt!!! I made a quilt for our queen size bed, but now we have a king and the store bought ones are just not big enough, I'm sure yours would fit my bed tho!!!!!!!!

Karin, what is it about you? Are you the long lost sister I never had? I want to make this one too, now that the gypsy is a flimsy! What a wonderful trip quilt! It's the kind you need to designate a recipiant in your will, else they will fight over it! I just l♥ve it!Thanks for sharing and inspiring me.

I love love love it!!! I love how the centers come together - you did a great job!! I love the pics with the horses! Do NOT let him eat it though!!

KARIN! Ohmygosh ... this is HUGE and BEAUTIFUL! Love it! You did a marvelous job with it. And I'm glad you've got horses with enough errr ... horse sense ... to appreciate the finer things in life!

Karin that is the most amazing, breathtaking quilt! OH MY! Gorgeous! And your photography is outstanding..love the horses enjoying the quilt.

What a wonderful quilt! You really should have a gold medal for this one :) And wonderful pictures, I loved those with the horses!

The quilt (and size) is amazing - I love scrappy and you defently deserve the gold medal for this one! I love the pics of your quilts taken around your ranch and normally I dont mind if mine are getting a bit dirty - I just dont want those I´m giving away (well which are the most) to get dirty.

i love those photos of the horses smelling that quilt

How did I miss this one before? Unbelievable. You sure do get a lot done, girl! That one is so beautiful. Well, dang it, all your quilts are beautiful -- I'm a bit jealous, I guess. And that's the kind of help I get around with my photo shoots. Photobombers and inspectors!

Holy Spectacular Moly! That is an AMAZING quilt! Wowee!

I have been so busy I haven't been over. I am FINALLY getting here and my oh my did I miss an AMAZING quilt. It is wonderful!!!!!!!!

That's a beautiful quilt! And I think the pillows look great too!

I love it! I'm trying to get one done for myself too!

Stunning! I know you will enjoy it for many,many years.

BEAUTIFUL!!!!! Love all your help also.

Love your quilt and that you were so excited to have it done! What an accomplishment!
I love the colors of the Western Quilt!
Thanks for sharing!