And they didn't last long because last Saturday, May 7th, we had our first 100° day. Sigh. 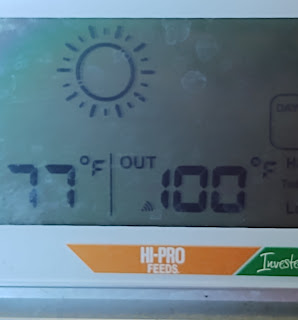 But I know it's Spring because we've had weeks of nonstop wind. There's nothing to stop it out here in the desert. It's relentless. Now if it would only blow in some rain. Not a drop since September and our dew points are consistantly negative. Much of NM is on fire, but thankfully we haven't had to contend with any of that yet. The closest was about 20 miles from us, but it's horrible for those who are in the path of the flames. Some of you have checked in on us and I am touched by your thoughtfulness - thank you. We're drying up and blowing away, but we're safe. Seems that praying for rain is something we do on a daily basis out here. Right now those prayers are for all of those in the path of the fires as well as for the firefighters and folks out there battling the flames. 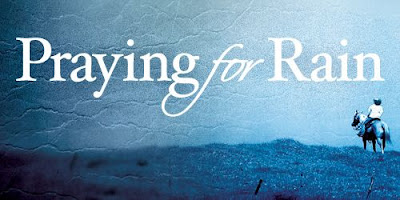 But the fact that I haven't been posting is proof that winter is behind us! I've been spending my days outdoors. I planted a small garden and am eagerly awaiting the first tomatoes: 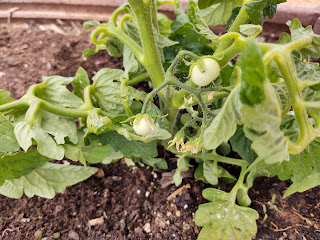 Gardens are hit and miss here. I water at dawn and at dusk, but without rain, they grow, but they just don't grow the way they do when God does the watering. I planted tomatoes (both cherry and regular), jalapenos, red-yellow-green-orange peppers, squash, zucchini, onions, radishes, and carrots. It's too hot for lettuce and spinach, but I'll plant those in the Fall. I wish I could find some rhubarb plants, but I may have to start those from seed if I can't find any. I should have done that a few months ago. Yesterday I found some information about starting some from store bought rhubarb so I may have to give that a shot.

I bought a white Crape myrtle to try. Around here, plants have to be hardy. They need to be able to weather 120° in the summer and sub 0° in the winter, not to mention 40-50 mph sustained winds on a regular basis in the Spring. That's asking a lot of a plant. 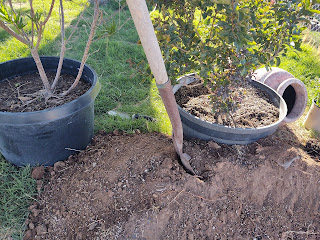 I also splurged on a desert willow. Nurseries are a weakness for me, but for the most part, I've learned to be strong after spending too much money just to watch plants wither away. I have spent good money on beautiful hanging plants, watered them faithfully twice a day, and taken them down day after day to protect them from the wind. and just watched them struggle.

The Cosmos I planted a few years back seem to be faithful though - they're not blooming yet, but they are growing quickly and soon I'll have a 20' flowerbed filled with happiness. I friend once told me they were God's gift to ranch wives because they thrive in these brutal conditions.

The other hardy plant that seems to have established itself here is Vinca Major: 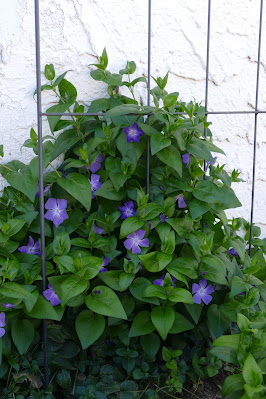 Our girl gave me some elephant ear bulbs a few years ago and I have one spot where they are protected from the afternoon sun and they do well here: 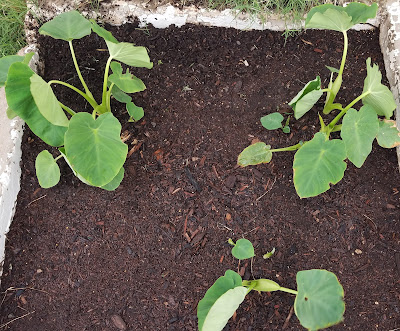 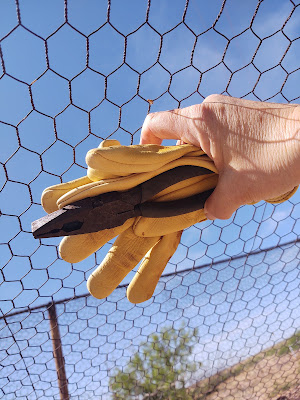 I talked to a fella that works at the Farm Store last week He grew up out here. His family moved here in 1961 when he was 8 and he said the chicken coop was here then so that explains why the poor thing looks so dilapidated, but my chickens are plumb happy so I just keep mending: 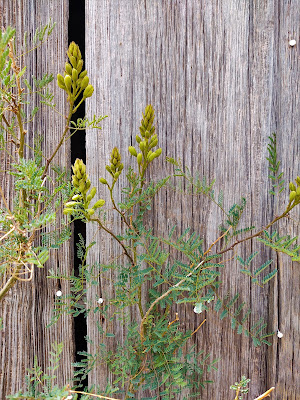 The baby chicks are growing fast and yesterday was moving day - it was time to introduce them to the chicken coop: 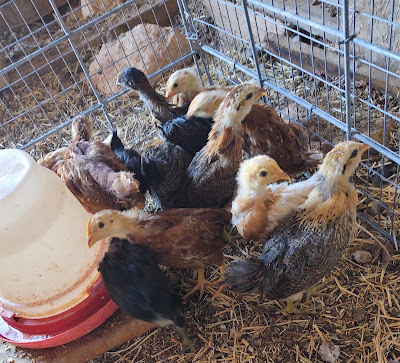 A few years ago we cobbled together this pen to keep the babies separate from the older girls until they all acclimate to each other. 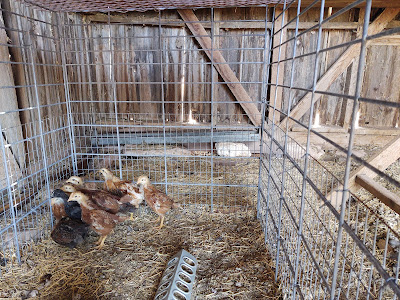 I'll keep them in here for a few weeks and then set them loose, but still keep them shut in the chicken yard for a few more weeks so they'll know where home is. My older chickens will not be happy because they are used to running free.

Mowing and weed eating has begun as well and I always have a sprinkler going somewhere - our yard, the bunkhouse yard, and trees out at the barn, as well as trees by the chicken coop, and around head quarters are always being watered so that's a lot of hose hauling. I have multiple 100' hoses, but am forever moving sprinklers.

Doesn't leave a lot of time for sewing, but I love playing in the dirt and my trusty assistant is always on hand to keep me on task: 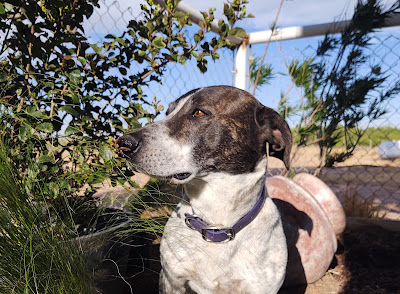 This has been my most recent project: 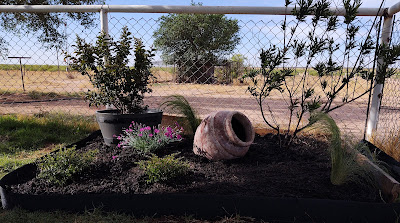 We've been going pretty hard and  between unloading 50# sacks of feed, hauling 40# water bottles, and all of the coop, garden, and yard work, my back reminded me that it's no longer 20...or 30...or 40...and it's closer to 60 than 50 so I stretched out on the floor this afternoon to give it a rest and Skeet trotted in and promptly plopped down next to me. Sometimes when he runs with DH or tags along when he's horseback, he comes back limping so we give him a Carprovet (an anti-inflammatory medication for dogs). I think we both need one today. 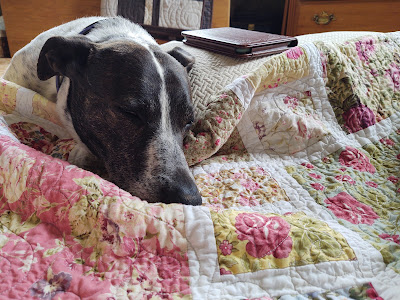 I sure wish I could send you our rain. We have had below average temperatures all spring. We actually had at least 6 inches of snow on April 11th which is unheard of here. Never have we had snow that late in the year. April rainfall was above average and it looks like May will be also. We are missing our May bloom. We do often get June gloom so I am guessing our summer may not arrive until July.
My oldest Grandson is attending college in Las Cruces, NM and is not missing the rain but I am betting he is not really enjoying the heat either. With prices for travel what the currently are he decided to find a local job and stay there over the summer instead of trying to figure out what to do with his stuff and come home for the summer. I just may have to visit New Mexico sometime just so I can see him. However, I don’t think I will do that in the summer. We had two super hot days last summer where we hit 116 and I thought I would melt. I was so grateful for air conditioning. Many people in our area do not as we usually only hit 100 about once a year.

We have some extra rain here in Virginia that I would donate if I could (but are likely to have a month or so of our version of drought in August!). I hope you have a protected spot for your crepe myrtle, or that it is a special hardy variety - ours here wouldn't stand your cold winters!

I found your blog post through Judy mentioning a lemon meringue cake which looks delicious. I’d like to received future post but couldn’t find a place to sign up. My email is howland no space quilt at g no space mail dot com. I loved your quilt photos too. Thanks!

Please, I don't want to minimize your work, pain or time constraints. Skeet has my heart. When I see him following the cowboy, I am in awe and appreciation. I sincerely love this dog. I know, coming out of no where. Not so. I have followed you for years. Just don't comment. But I will about your dog!

Ranchers and Farmers are always at the mercy of Mother Nature. I will remember to pray for rain. I have friends in Australia and they have had months and months of relentless rains/floods. Skeet is so good and faithful, and I am sure he is the best nurse ever. My Mother says getting old is not for the faint of heart

You have been busy!!
I am glad you are safe from fires - I am SO over that wind!!! it can stop now!!!Every grass seed we have planted over the old oil wells is now in another state!
Enjoy!!! Hope rain comes your way