Our girl came home for a day between nutrition conferences and feedlot boot-camps and it happened to fall on her birthday. She requested cheesecake for her birthday so that sent me on the hunt for the best cheesecake ever. I've made a few in the past, but none of them were spectacular and I will admit to having caved and having made the boxed cheesecake mix in the past as well as the one that calls for sweetened condensed milk.

I took my chances and browsed through Pinterest and fell upon this recipe:

Anyone can claimed their recipe is 'The Best', but these ingredients really did sound like they had the potential to make it so, so I said a little prayer and held my breath. 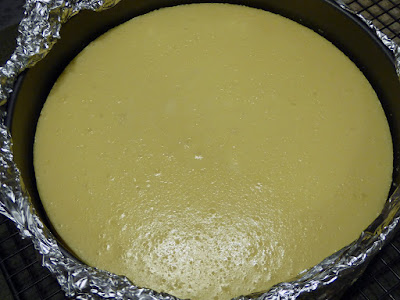 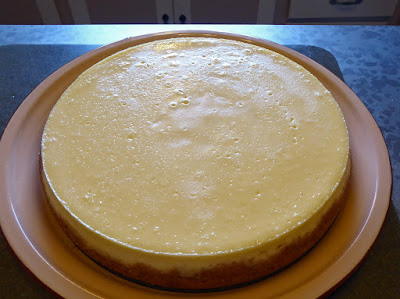 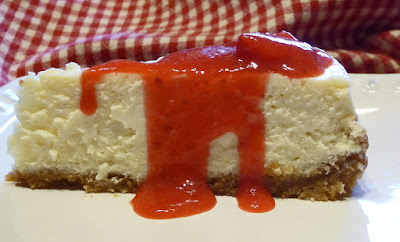 The only thing I did differently, was that I baked it in a 10" spring-form pan. Our girl had just been to The Cheesecake Factory in Salt Lake City the previous week and she claimed this cheesecake to be better than theirs. Yes, she is my child, but if you knew her, you would know that she is as honest as her Daddy. I've never known him to lie and she would never say that just to appease her Mama.

DH is not a huge cheesecake fan and even he loved it so he is now!  Six thumbs up from the taste testers at this house! 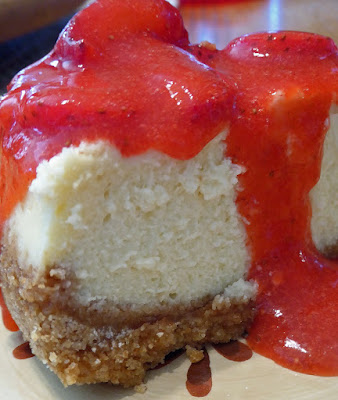 Now I've got to add another leg to that morning walk, but I'll gladly do so because another slice of cheesecake is calling my name!

Mmmm, I LOVE cheesecake and so did my daddy! He always talked about a place in Washington DC that had the BEST cheesecake (crustless) so I was always looking for a recipe to at least equal Blackies. My DH was from NY and, of course, they have some great cheesecake there but I REALLY like the recipe I finally settled on. Of course, I don't make it hardly ever since my daddy and DH are both gone but it was a good one! Glad your DD liked yours!!

It looks professionally made. Thanks for sharing link. Guess I'll look for a spring form pan.

Wow, may I come to your house for my birthday? I love cheesecake, but I've only made the box kind - a far cry from the one in your photos. Well done!

Okay, Karin, I sitting in my canning kitchen watching the gage on the last 7quarts of green beans I'm canning this year, and up pops your blog on my email. I've never made a cheesecake, but you have convinced me I AM WOMAN, I CAN DO IT!!!! I've done the boxed mixes and frozen ones. Our friend from Florida is flying in Wednesday and he always eats the evening meal with us. I try to fix special desserts and this sounds pretty special. Thanks for pushing me over the edge....ummm, I mean thanks for encouraging me to try something new!!!

I was happy to see your rain gage photo!! We are up to 32" for the year. Surprisingly green for the first of aAugust.

Holy Cow I love cheesecake!! If only I could blink my eyes and be in your kitchen you would not have to worry about walking off any cheesecake:)

It looks simply scrumptious!! Wish I could taste a piece right now!!

That is beautiful. Nary a crack-- I think that is some feat!! Almost thou persuadest the me to make one!

Oh this one looks wonderful! Hope you post the recipe? I haven't made cheesecake in years, Ken thinks he doesn't like cheese cake, I'd like to prove to him he does like cheese cake with this one. I have the spring form pan just waithing!

Looks delicious--going to give it a try

Looks super delicious! Have you tried cheesecake in your pressure cooker yet? It's pretty yummy, too. {grin} I used a recipe from Pressure Cooking Today for a classic NY-style and we were not disappointed! I found a 7" springform pan that fit my PC pretty much perfectly and gave it a go. Skeptic no more!