DH had an elk hunt this past weekend. He really enjoys hunting and we always look forward to adding to our winter meat supply, but it's like passing an act of Congress for him to get away and this time of the year is especially difficult and he's already plumb wore out.

We're in the middle of our fall Cow Works. We just finished most of the beef cattle - still have some in December and we'll be working the Corrientes next week. The weaned calves have been turned out to pasture, but the pasture conditions are not conducive to optimum grazing conditions so DH hauled 7 bales of hay out the day he left: 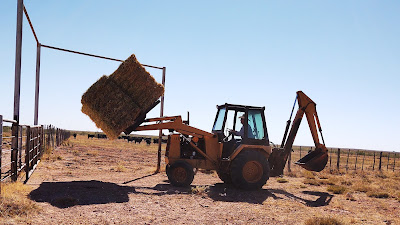 68° made for the prettiest day even though we're desperate for rain: 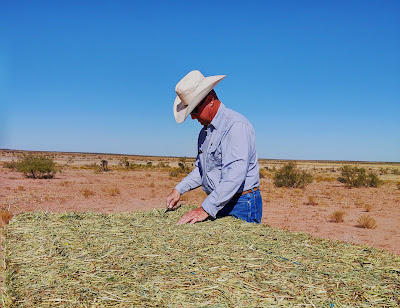 I walked out about 1/4 of a mile to get gates for him: 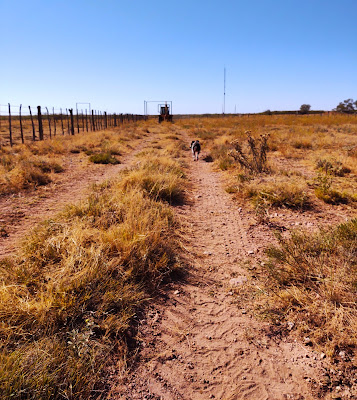 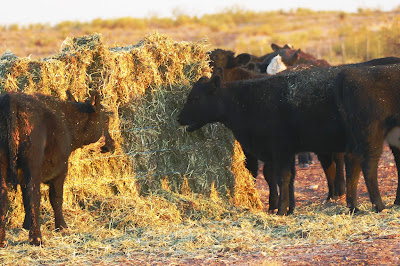 DH is not content with an easy hunt.  His preference is to pack a camp on horseback and stay in a spot where few others will work to get to. However, his Dad, at 83, no longer cares to do that and we are just thankful that he is still able to saddle up and ride through rough country and that they are able to spend this time together.

So a few days before he left, he shod 3 horses: 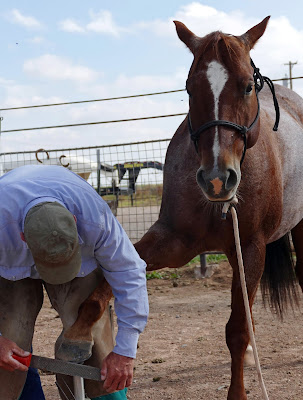 Skeet was none too happy to see DH loading horses in the trailer and leaving out - he was right on his heels all day:

And yes, for those of you that have asked, Skeet was finally de-skunked. I used a mixture of Dawn-Hydrogen Peroxide-Baking Soda. This was not the first time he's tried to make friends with a skunk and that combination does the trick.

I was left with chore duty: 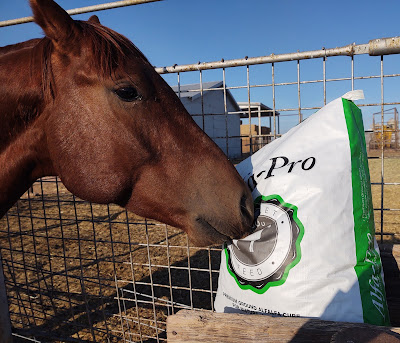 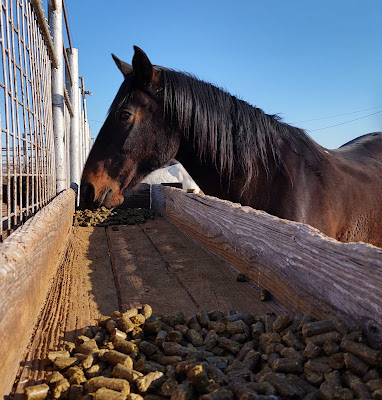 As well as the beef and a few odds and ends: 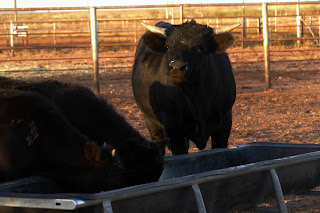 Skeet and I loaded up in the mornings 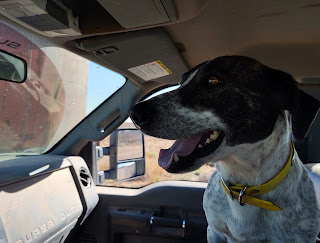 to check the pressure pump a few miles from the house: 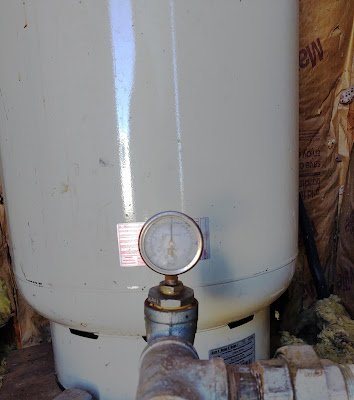 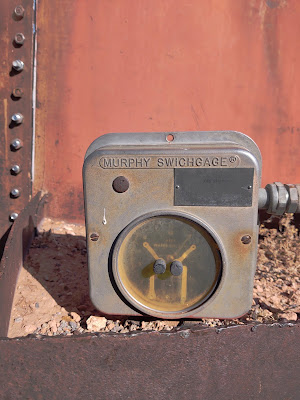 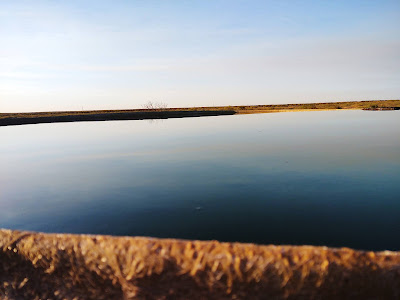 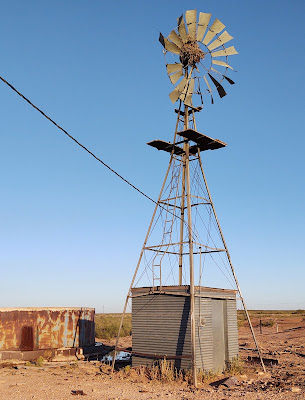 to switch a well so that it would send water north: 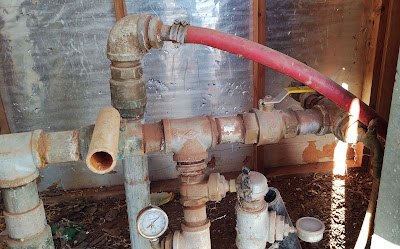 turn off a pump 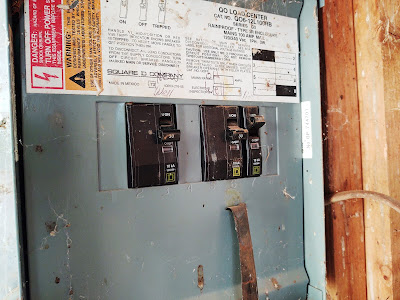 And check on the calves 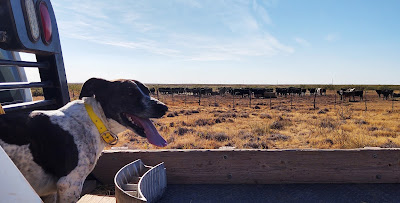 I just prayed that nothing would go amiss while DH was away because I'm no electrician or plumber and I didn't want to have to call him back if problems arose. He's been burning the candle at both ends lately.

The other day I said, "Can I ask you a question"?

When I let the chickens out in the mornings, they make a beeline for the pens. This poor girl's looking pretty ragged: 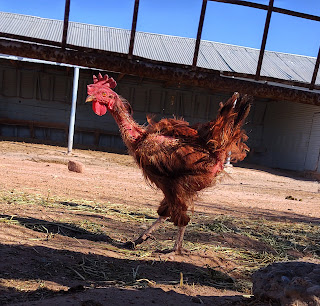 She's been nearly naked all summer. I've had chickens molt on occasion, but I've never had one go to this extreme, but looks like she's finally growing a few feathers back which is a good thing because she's going to be thankful for those as winter approaches. We're expecting out first freeze next week. 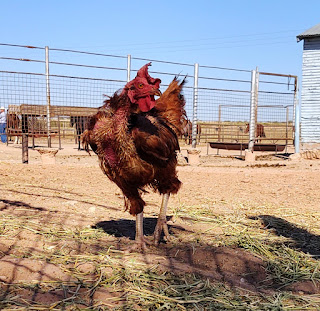 DH's hunt was a 5 day hunt, but he left on Friday evening and was back home by 9:30 Sunday morning. He saw elk on Saturday, but didn't bring one home.  He is just being pulled in too many other directions right now and figured he'd just come home. We're always happier when he's home, but I was also hoping he'd get a chance to relax and unwind. I told DH he didn't need to hurry back - Skeet had things under control and took good care of me while he was away: 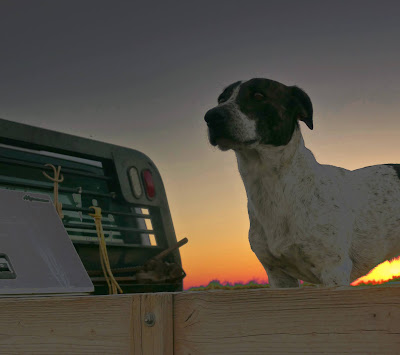 You both are too busy!!! Your chicken is just scary looking!!! Glad to hear Skeet is smelling good and of course he is looking good too! I have to tell you my mom was the other person I have ever known who liked the smell of skunk! She thought it smelled like fresh cut grass!!! Any time we smell a skunk, we say "Mmmmm skunk"! LOL! My mom also loved Mondays! Other than those two quirks, she was a wonderful mother!

Skeet on the job!!! hes got this - haha! love it - and glad he got away for a little bit. We are with you on the rain - bring it on! or snow - I am not picky at this point in the game

I admire your passion for farming. You are such a hard working family. Oh no on the skunk! Wow, that chicken is looking pretty ragged. When my chickens lose a lot of neck feathers I spray the hen house down for lice. But if she's the only one that has it, that's probably not it. Poor thing. Love the pic of your dog running down the lane.

Thank you for sharing your days of substituting for DH. He must have had a lot on his mind to come home so soon. Skeet looked like he was right on the job with those flying ears. Such sunny bright blue skies! Best Wishes this Winter.

It’s nice that your husband and his Dad were able to spend some time together - just sorry the elk didn’t cooperate. You had some big boots to fill while he was gone, and I know you and Skeet did a great job.

This is an odd reply--but I was wondering if you could post a picture of the wool patchwork quilt you made for DH a while back. I want to make one and would love to see how yours turned out. Many thanks.

You have to care for animals and care for yourselves. Jesus gave us a day of rest. Water and feed the animals and take a day to spend with Jesus, your hubby too! Will keep him in perfect peace whose mind is stayed on thee.

Well, I can understand why DH came home early. Sometimes being away is not worth the worry of things left undone at home. Skeet is such a good helper. We're farm-dog poor since Abby got killed 3 weeks ago. We've been in several long discussions about whether to get another dog, and if so, what kind? A ranch without a dog is . . . well . . . it seems empty, and the bad critters are figuring out there's no danger here any more, and inching closer and closer to the house. Some nights I feel like I need to just sit on the porch with the gun and guard everyone! We haven't had a hard freeze yet, but I feel it's coming soon. Typical Missouri, it was 82 on Thursday, and only 47 yesterday! The livestock are all finally starting to put on their winter coats, and we finally had to turn on the furnace. We're putting out our first bale of hay today . . . always a sign that winter is here.

Oh, that's too bad he came back so soon & without an elk but I know you were at least kinda happy! HA I have a question..we were out your way and beyond and I saw one 'water trough' (I guess that's what you call it) but instead of a windmill it had a solar panel. Do they sometimes use a solar panel instead of a windmill? First time I'd ever seen that and was going to investigate but thought I'd ask you first.

I’m so glad you were able to hold down the fort while you were in charge. I can certainly relate to your post except when I’m left in charge, Murphy shows up:) My kids always tease me about which fence will need to be repaired or where to find me when I get stuck checking cows. Ranchwives earn every gray hair!