All that cooking I wrote about a few weeks ago was to celebrate the arrival of this precious gift: 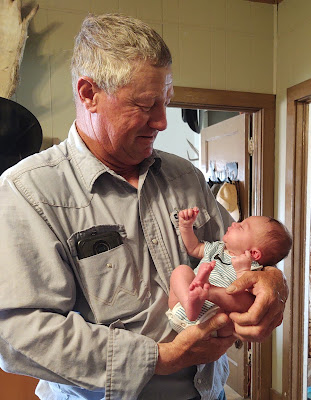 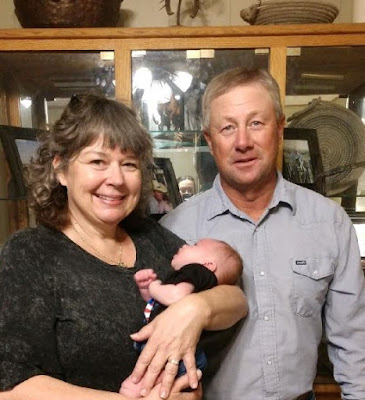 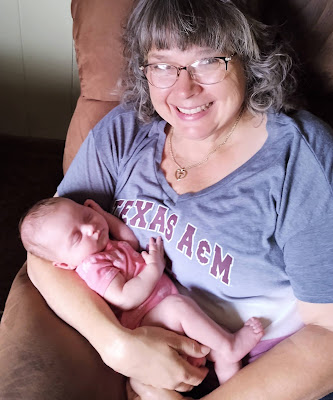 Everyone came for the weekend and we all soaked in every minute. She is just precious and SO sweet natured. 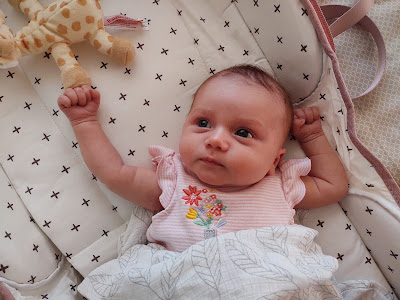 I didn't even take a thousand pictures because I was too busy inhaling time with this charming baby: 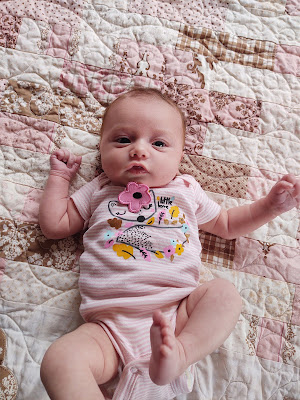 We all spent lots of time visiting

And passing Emma around 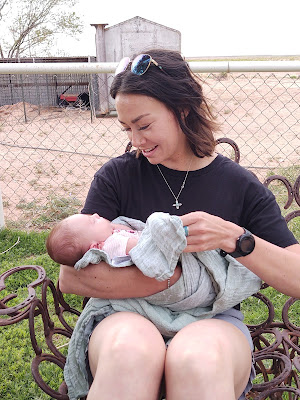 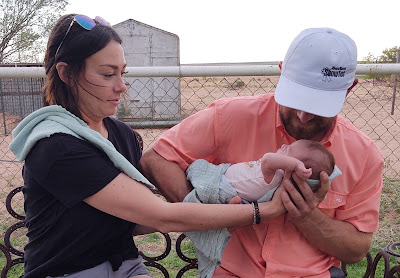 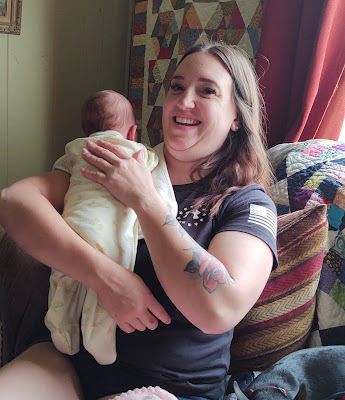 And it warms a mama's heart to see her boy become a daddy and take such a hand-on approach with his daughter: 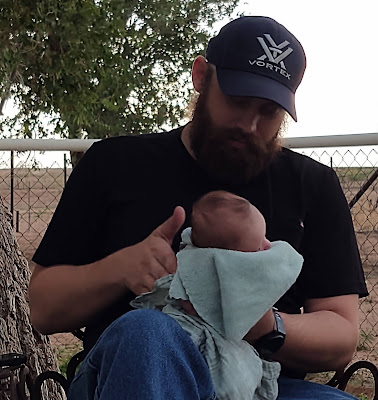 They are making a good team: 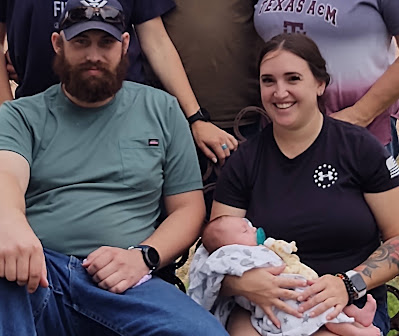 They asked these two to be Emma's Godparents: 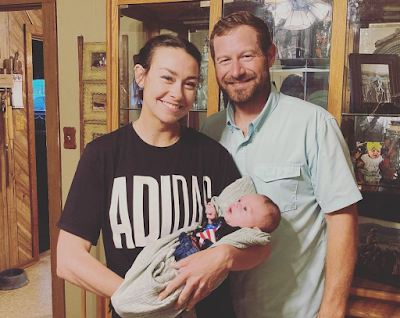 The men manned the smokers: 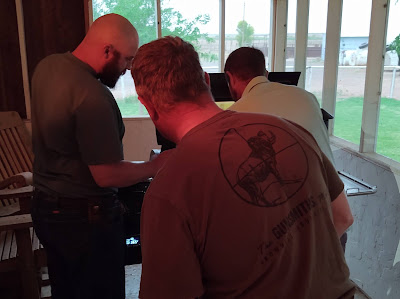 Because no-one goes hungry at the end of the dirt road: 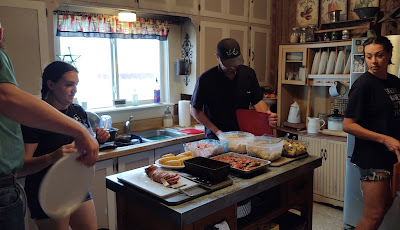 The electricity went out one night, but that's not unusual around here. We just pulled out the propane lanterns and gathered round the cribbage board:

Emma is a champion sleeper so we had lots of time to visit, but there's not much I'd rather do than hold this sweet girl: 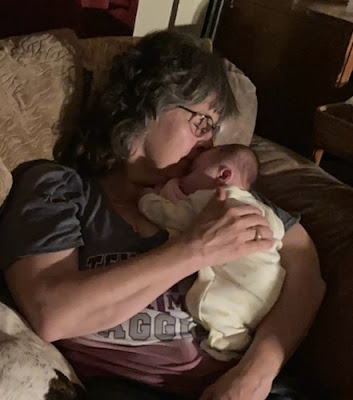 We had a rousing conversation about what we wanted to be called. I've spent a lot of time thinking about it and our girl laughed, "It's not that big of a deal."

I was thinking Gram and Pap.

She threw some names out there and I told her I got to chose and I could chose anything I wanted. I could be Pooh Bear if I wanted. Side note: I have a soft spot for Winnie the Pooh and I read a lot of that to the kids when they were little. I could even do all the voices although I'm pretty certain I've lost that ability.

Our girl's fella, Kenny, said he had a friend who called his grandpa PaDaddy and when our girl said I could be called Pooh Bear he piped up that it was perfect

"Ya'll could be Pooh Bear and PaDaddy" Now mind you, Kenny is from Oklahoma and he has an accent so imagine that being said with a strong southern drawl. Oh my word! We bout wet our britches we laughed so hard!

Now, I don't really want to be called Pooh Bear but when Kenny says it, it just cracks me up and I am afraid Pooh Bear and PaDaddy may stick, but I'm afraid we'll have to move to Oklahoma to live up to it. 😂 Our girl looked at a list and saw Moo-ma and she thought that was perfect since we raise cattle, but I vetoed that right quick.

I imagine Emma will name us anyway and it'll be perfect. Did I say we were smitten? 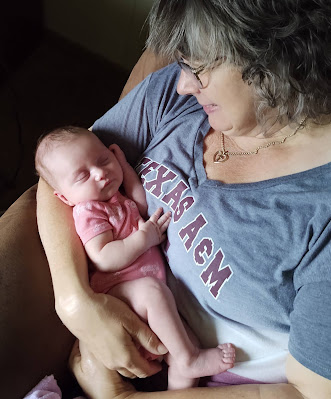 The family is growing and we couldn't be happier!

Emma, you have brought such joy into our lives! Adventure lies ahead!

Congratulations on your Precious granddaughter!!!

Good morning Karin, congrats on being Grandparents, what a wonderful feeling. Such a lovely little girl :)

Congratulations on becoming grandparents!!! Emma is just beautiful!!! My mom used to say being a grandma was the best thing that ever happened to her!!! Ha! Pooh Bear is okay but I love PaDaddy; that's so original!!!
So happy for your family expansion!!! What does Skeet think of Emma?

Congratulations! She is beautiful! Enjoy!

Congratulations! I just became "smitten" for the 10th time. It doesn't get old just more expensive! Best wishes and love to your family. Enjoy!

Congratulations! Grandparenting looks good on you two!
We are Grammy and Grandpa to our two granddaughters. I said we needed different titles so they would know whose house they were going to when Mama said they were going to visit.
Best wishes to you as you begin this lifelong relationship. May God richly bless little Emma.

Congratulations! She is beautiful! Enjoy!

New little ones are so precious. It is obvious there is a lot of love here--whatever they end up calling you. :)

Awwww I am in tears of joy for you!!! how very sweet PoohBear!!!!

I am Nana Deanna. My mother is Ma-Gaw (Invented by Grandson 2). My father is Papa. Husband's mother was Grandmother (always). So many names for love...

Our oldest grandson could not say grandma and grandpa when he was young. We ended up being called MaeMae and BaPa. It stuck and all the grandkids call us that. He is now 18 and will be going to college in Mew Mexico in August. I can’t believe that he is going so far away. I would never say I have a favorite grandchild but if I did he would be near the top of the list.

Most precious bundle of joy. She is a very beautiful baby. Congratulations, gramps, and to the new parents too. Enjoy! ;^)

Congratulations!!! I know that precious one will love coming to visit you two, and you guys will make wonderful memories together.

Congratulations! How very sweet and precious! Enjoy every minute with her. She'll be in college before you can blink! I hope they live fairly close so you can see her often.

Well, here I'd thought you guys were already grandparents as I thought I'd seen a pic quite some time ago when your son was visiting with his son. Obviously I was mistaken and CONGRATULATIONS!! I think I like your first choice for grandparent names. I'm just gramma and my DH was called pawpaw before his passing (we only got one and she's 24 already..good grief!).

Congratulations on your new grand daughter! She is so sweet and beautiful! Enjoy!🥰💗💖

Have a wonderful time with the granddaughter! They are such a blessing and fun to make quilts for!

Congratulations, you must be over the moon--and rightly so! How wonderful for your family, to be so blessed. :)

Congratulations! She is a keeper :)

I love special grandparent names. We called my grandmothers Ma Mere’ and Mot-Mot. My parents (Jack and Jane) were called GrandJane and GrandJack. (Also GranJane and GranJack by some….) Emma is absolutely beautiful! Do they live near by?

I too became a Grandma, YESTERDAY! (June 28). DS has two stepdaughters, but yesterday they gave me a grandson. The girls call me Granny. Which I like. (If the Doweger Countess in Downton Abby can be Granny, so can I!) congrats on this new part of life! I think we both will love it. I get to meet Mr Braxtyn tonight.

Congratulations! Your heart will has now grown to a new level of love. We had our third granddaughter on May 16th and we're enjoying all of the sweet newborn goodness also. I tried many different names for our oldest granddaughter to call me and she settled on Nae Nae because she loves horses and naturally I should be called the sound her favorite animal makes:)
I see many precious pink quilts in your future.

Oh my goodness, she is adorable! Congratulations! It's awful hard to let go of the new grandbabies when we finally get to hold them, especially when they are still so small. I hope she and her family live close enough to visit often!
(And I'm sorry I'm so late reading your posts. Time eludes me.)