I've been away from home again, back in Texas going through my folks' house, getting ready for the estate sale, but I thought I'd pop in with a quick post because I promised I wouldn't disappear again.

I've spent hours upon hours going through dozens of albums and boxes of photos: 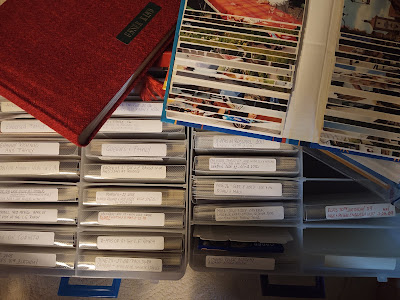 It was hard tossing thousands of pictures, but I felt like I needed to at least flip through every one. So many fun memories and these aren't even MY pictures. Still, many of them were photos I shared with my folks or photos they took while visiting us. I found photos of us when I introduced DH to my folks when we were dating: 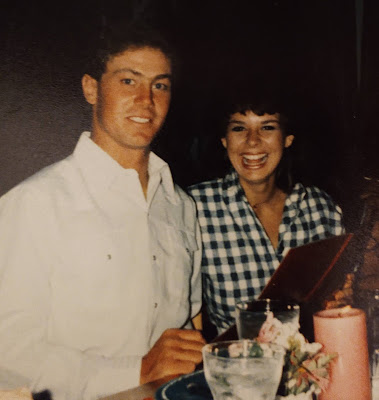 And photos of us at my college graduation: 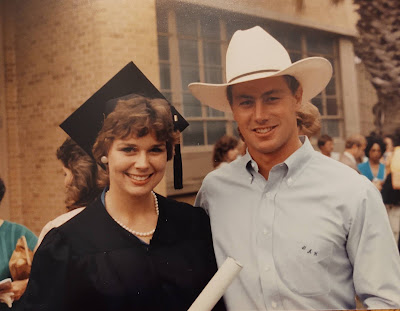 The first place we lived after college was Simplot, Idaho. We both worked at Simplot Feedlot. I was on the phone with DH when I came across these  photos and I laughed when I told him I found a photo of the old trailer house we lived in. Looking at it now, it's awful, but we were in love. He laughed and said it was nice compared to the one they first showed him.

He said, "All we had was a bedroll ( a cowboy sleeping bag) and each other."  I told him that was all we needed then. 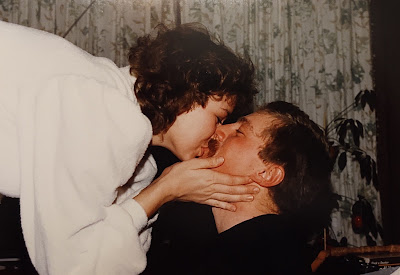 And 35 years later that's all we still need.

We still need to go through my MIL pictures; she passed last November. They are in a huge plastic tub. Those pictures of you and hubby are adorable! Our first place was a small 2 bedroom apartment in olive green and harvest gold and this was the late '80's so that tells you how dated it was! Great memories though!

The two of you have your priorities in the right order. People die and leave so much stuff behind for others to sort out.

GEEZ! You guys are the MODEL couple! Such a great role model for your kids and others. But that's a tough job you're having to do right now. Hopefully the estate sale will be soon and the rest will be easy.

Wonderful...I got tears ....happy tears!!!
Thank you for sharing

A sweet trip down memory lane. Thanks for sharing!

A great post. Photos are time capsules of our lives. I’d say you and your handsome cowboy were meant for each other.

You two are just the cutest couple! Your kids are the spitting images of you two. :)

That's so sweet! Isnt young love grand. I'm sitting here nursing my sore back after surgery and you really gave me a lift, thanks so much.

So cute! Those are the treasure photos!!!