Still Weaning and a Speedy Trip to Nebraska

I'm still playing catch up, but we finally finished weaning on Saturday and I've still got pictures to sort through and share from the previous week. Most days, the boys gather a pasture, drive them to the pens, sort off the calves from the cows, run the calves through the chute to process and vaccinate them, and then run the cows through. They bring them up a few head at a time: 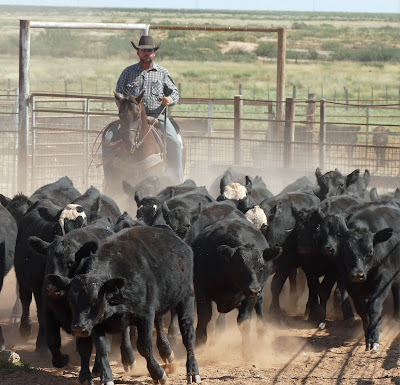 And funnel the calves towards the chute using a series of gates:

Each calf  and cow gets vaccinated 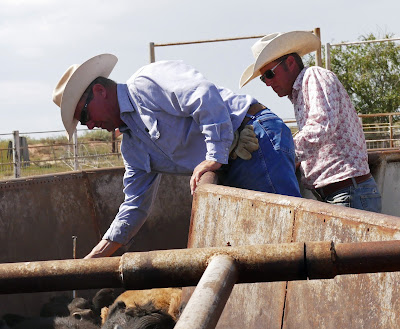 and the cows and bulls get a dose of Cydectin, which is a pour on wormer for internal and external parasites 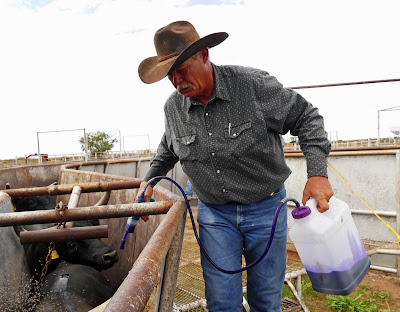 And the boys just run down the line, making sure each animal is treated 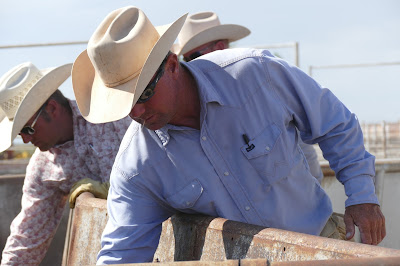 Then DH runs the chute 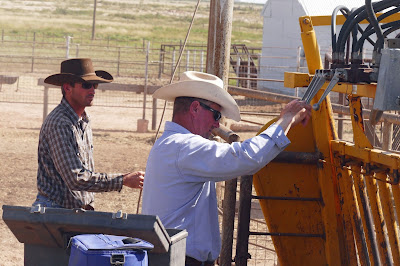 And Olan runs the gate, opening it one way or the other in order to separate the heifers from the steers 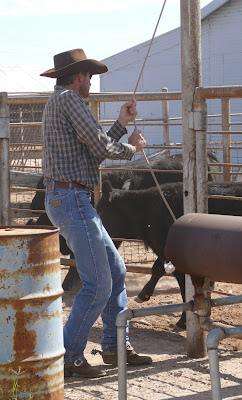 And then the process starts again as the boys bring up another bunch: 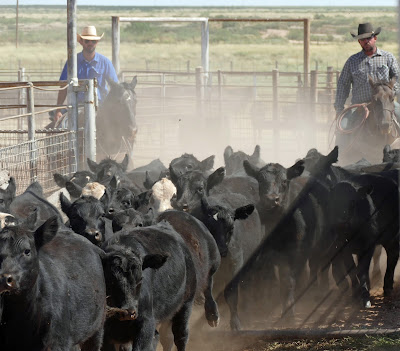 There are 4 sets of pens on the ranch so you never really get a sense of how many cattle DH tends to because they work them a few pastures at a time and they're never together in one place. We also raise both beef and Corriente cattle and those are kept separate, but at any given time there are between 1500-2000 hd of cattle. 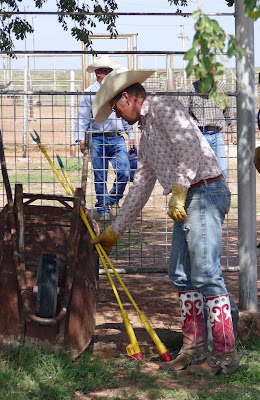 On Friday, the 20th we packed up, gathered my FIL and headed north to Nebraska for a funeral. DH's cousin, Dave, passed away after battling cancer for 20 months. DH has a lot of cousins...over 35, but he was closest to Dave. They shared a love for ranching and horses and family. We drove up on Friday because we wouldn't miss a chance to honor Dave and let his sweet wife know how much we treasure them both. DH has a HUGE family and he grew up in a tiny town in Nebraska and over 700 folks gathered at the local school gym because it was the only building in town large enough to accommodate a crowd that size. It was so good to catch up with everyone - I adore DH's family - but I sure wish we had been there for a different reason.

We drove back on Sunday. 1538 miles. I wish I had taken a recorder to document the stories that my FIL and DH shared across the miles: 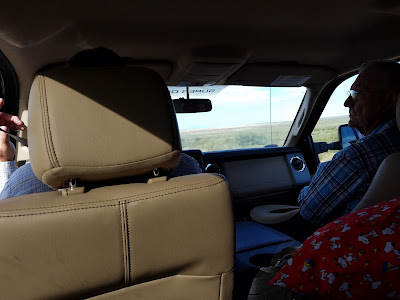 I could have written a book about the Sandhills of Nebraska as I sat in the back so they could visit and stitched the miles away: 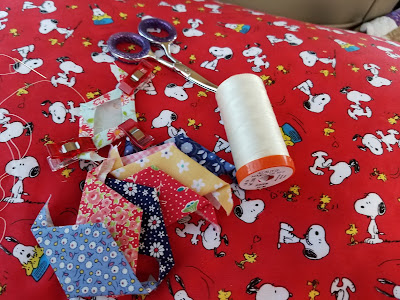 With the exception of about 30 minutes one day, it's been almost 2 months since I've sewn a stitch or even darkened the doorway of my sewing room so it was rather nice to have uninterrupted time to work on my never-ending English Paper Piecing project. 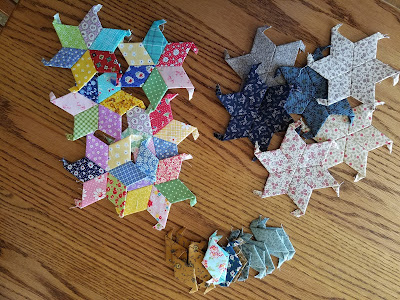 You would have thought I would have more done, but our trip was almost entirely composed of little country back roads and it was a challenge to thread my needle and piece the little stars together. And the answer to your question is yes...these are for two different quilts. I haven't made a lot of progress, but here's where they were before our trip: 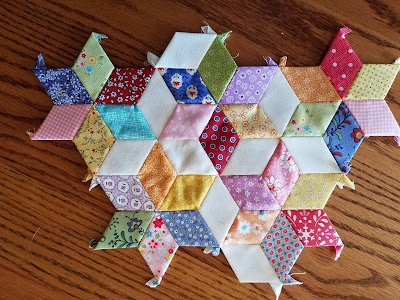 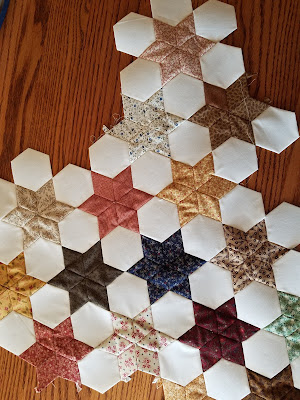 Glad you got a bit of sewing in Karin, but sorry for the reason for your trip. Prayers for you/dh and family.

After all of the separating, do you hear all of the bawling, or are they far enough away that you aren't bothered? I know when the pastures around us are full after weaning takes place, I can hardly sleep at night for the noise. :)
You have a LOT of cattle!
A few years ago we drove my MIL to her childhood home in Canada for a reunion. I had her sit up front, and I had a similar experience to yours, wishing I could have recorded all of the stories she shared. Neither hubby or I had a smart phone at the time, so that wasn't even an option.
I can barely hand stitch on the freeway, let alone back country roads. I'd say you got a lot done, considering.

I am so sorry for your family loss. Lovely stitching and such memories those cattle working picture invoke for me!!

Not a fun reason for a trip, but it was good that dh and his dad got to visit. I do English Paper Piecing when we travel a distance, but it seems like it's harder to thread the needle every trip! Thinking about you.

I always enjoy seeing your pictures and reading about your life there on the ranch. So sorry for the reason for your trip. It is always hard to loose a loved one -- even if you may be glad their suffering is over. I know what you mean about rough roads making it hard to sew. I try to have a project to work on while we travel. I currently am making the stars for a quilt like your bottom picture. What size pieces are you using? I am using 2 inch diamonds for my stars because I already had 2 inch hexies that I had used for an I Spy quilt that I made for our youngest grandchild. But I am making the hexies scrappy.

Sandhills of Nebraska!! That's the setting for Grace Snyder's No Time On My Hands. She was a great quilter too.
You are really an accomplished woman -Quilter, cook, photographer, computer wonder!

So sorry for your loss - bug hugs. I bet you learned a lot tho listening to those 2 men ;-)

What marvelous photos. I learn so much about ranch life from your blog, and I really appreciate that. Blessings to you.

Great job with the EPP. I have several projects going at once as well, so I never get bored when I'm on a long car ride.