It seems as if things never really slow down around here. I'm not complaining - it's just life and around here, we're never really off the clock. So many are longing for longer days, but we're up before the sun and don't close out the day until it's dark and even then, we sometimes have to tend to things by headlights and flashlights: 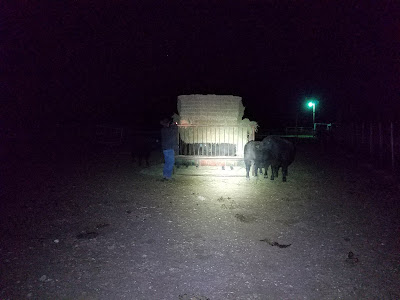 And as I get older, I'm pretty pooped at the end of those long days. However, I'm grateful that each day brings it's own measure of joy: 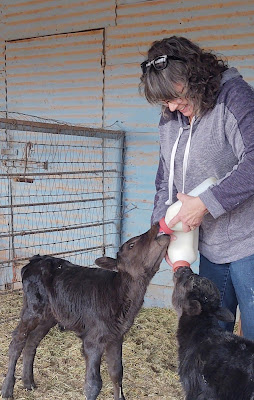 Yes, we now have 2 dogie calves that are eager to see me walk up with their breakfast and supper each day. I've cut back to feeding them twice a day. 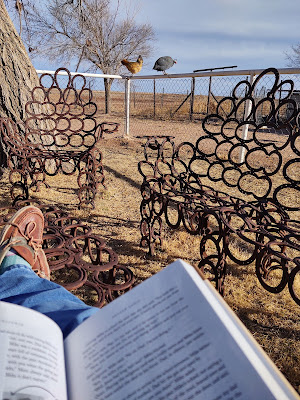 And I spent one pretty morning in the bottom of what is a dirt tank - that's what we call the water holes around here, but right now it really does just hold dirt 😕 - burning some of the files from my parents' real estate business. There is no chance of the fire getting out of control as there is nothing for it to burn: 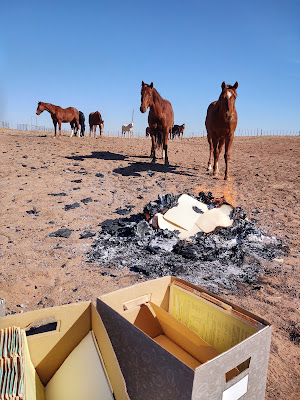 And DH and I have been back on leak repair duty: 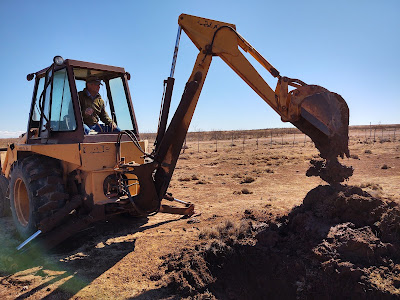 He fixes a lot more than I document here, but how many pictures of him fixing leaks do you really want to see? Still, it was a beautiful day and Skeet was on hand to oversee our project: 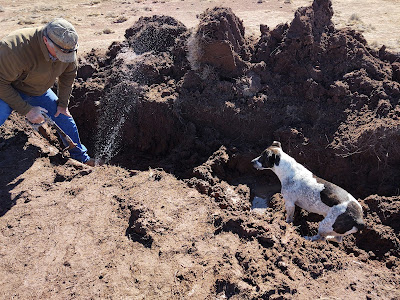 We had a special Brangus sale in town on Saturday that I worked and then it was back in for our regular Monday sale and there's one more special sale this next Saturday: 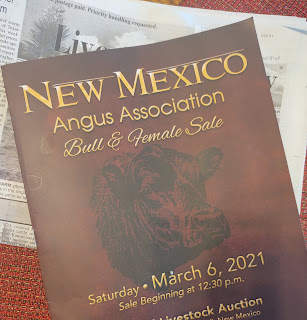 We got another load of hay in: 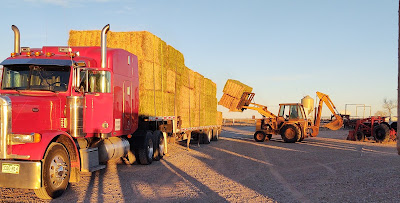 And DH and our camp man have been flaking it out. I've been at work thus far, but our camp man recently quit so I'll be on hay duty. It takes all morning, 3 days a week. We've never had to do that before. We've been through droughty conditions before, but this is the worst we've seen. There is NO grass and it's not a case of overgrazing or mismanagement. Grass won't grow without rain. It's the same story across the state as well as in much of West Texas. We're selling another load of heavy bred cows. We'll hold the ones that are currently calving until their babies are a little bigger. By the time the cattle have been sold, we will have decreased our numbers by 75%. It's a good life, but right now, it's a struggle.

And less cattle doesn't really mean less work. It just means DH will be tending to other projects that he hasn't had time for: 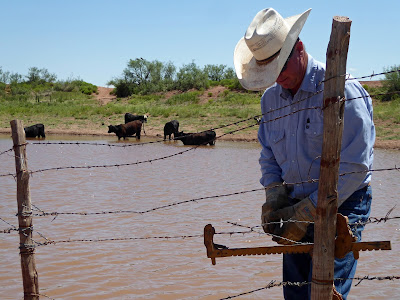 You can tell that's an old picture by the tank water and green grass. It'll be like this again one day: 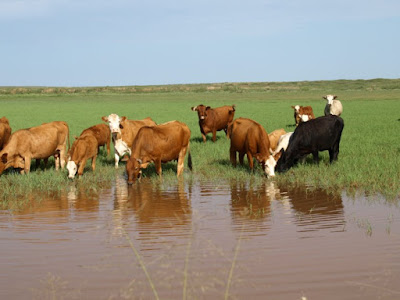 I always say, we're one day closer to the next big rain, but for now, we'll continue to be good stewards of this land that God has placed in our hands 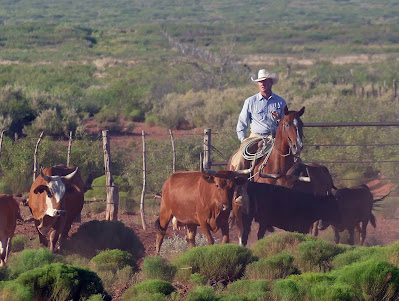 to be thankful for His merciful grace

and to be mindful that He is always in control 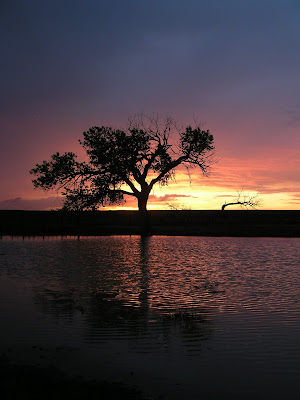 Good morning Karin. Yup keeping busy is a good thing, but it sure does wear a body out. Even without the rain, you have a beautiful place to take care. Praying the rains come to you soon. Have a great day.

Praying for life giving and sustaining rain!!! I remember hay duty, very well. I love those baby calves!!! What a lovely place you live on!

While we don't have cattle on our six acre spot in southeastern Arizona it is also incredibly dry--scary dry. We usually arrive sometime in October and by the time we head north to Montana for summer we've mowed the grass/weeds at least three times. This season we've not mowed even once. The gophers are eating the roots of our newly planted little trees and I've declared war. I worry about our well drilled four years ago at great expense. Yet new permits are being issued every day for deep wells for irrigation pivots and to irrigate new groves of pecan trees. My brother raises cows on his farm in Arkansas and they are slogging around in deep mud brought on by that nasty winter storm and now rain. Feast or famine.

Such amazing photos - and watching a man work... I can take photos of that all day long ( haha!!) Praying for rain for you and for us... of course - I have been begging for snow ... Take a nap!!

My parents in south-central Colorado are struggling, too. Tough times. Ours is a much smaller spread, but has been in the family more than 100 years...my grandmother was born in the house my parents live in. And we cannot see a future at this time...Painful times. But, there is still beauty in every day. And God is in his heaven.

Sending prayers up for some rain down on your home. ;^)

Now why'd your camp man up and quit? He was already working on one of the best ranches there is!! It's gotta be a tough life a lot of the time and sure glad you love it..I think worry'd get the best of me. Those little dogies have gotta be two great breaks in your day. Bring on the rain clouds!!