Whew! We made it through last week and are muddling our way through this week. It broke my heart to have to send another couple hundred hd of cattle down the road, but until it rains...and rains...and rains, we just can't keep 'em.

We've still got a few more loads to send out, but these mamas just had babies and we want to wait until the little ones get a few weeks of growing under them before we send them off. It takes a lot of country to run cattle around here. We're on 128,000 acres and we generally run about 1,200 hd. Our average rainfall is about 10" annually and we'd get along beautifully if we got that, but it's been a long time since it's rained like that in a regular basis. So now we're faced with some tough decisions and we've had to cut back our numbers by 75%. I don't want to think what'll happen if it doesn't rain this year. 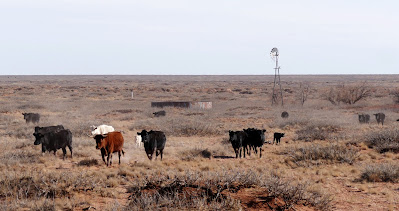 This isn't helping either: 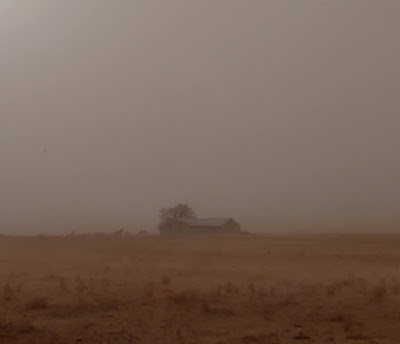 Wind. HARD wind and lots of it. I had to run to the vet clinic in town to pick up health papers on Tuesday. Can't see the vet clinic, but it's there: 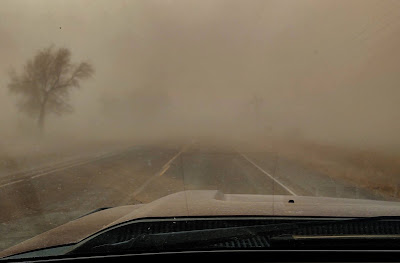 Dirt in your teeth and in your hair.

Dirt in your eyes and in your underwear. LOL

Welcome to spring in New Mexico. It's just a small taste of what it must have been like during the Dust Bowl era. I'm amazed at the resilience of the folks that experienced that. I'm not that tough.

The crew gathered cattle on Tuesday

The vet was here on Wednesday (yes, he got cookies) 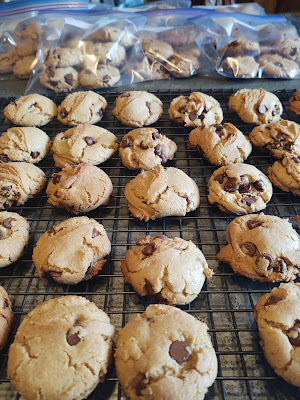 and we sent 2 loads out last Thursday and one today. 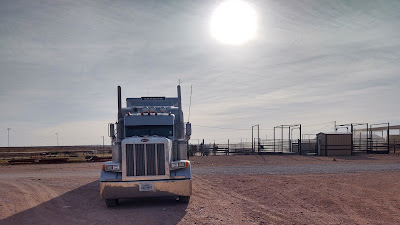 DH and I have been spending more time putting out hay. Sometimes it's first thing in the morning because we're trying to beat the wind: 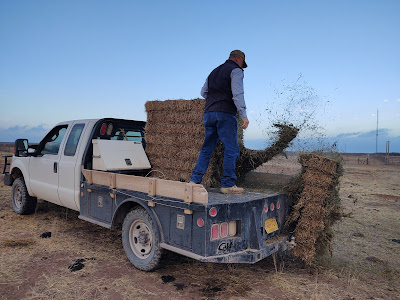 I'm looking forward to another weekend of leftovers on paper plates after feeding the crew 2 days last week and 2 more this week. Someone's going to ask what I fixed. Nothing new. Chicken Fried Steak, gravy, mashed potatoes, corn casserole, State fair Yeast Biscuits and Peach Cobbler and Ice Cream on Tuesday. On Wednesday they filled their plates with Brisket,  Hot links, Rancher's Potatoes, Baked Beans, Jalapeno Poppers, left over State Fair Yeast Biscuits, and Cookies that I realized I still needed to post about. They about cleaned me out. Good thing I kept a few back for the hay delivery fella for tomorrow. 😉

Last Sunday, DH and I spent 4 hours moving 73 pair from one end of North Adobe to the other (5 miles). 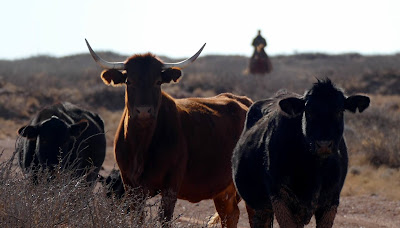 When we approached our destination, we were greeted by the welcoming committee: 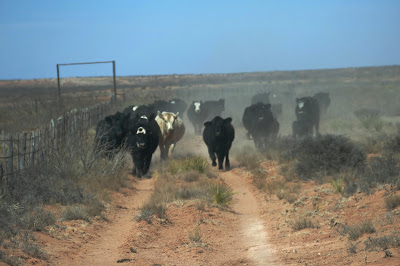 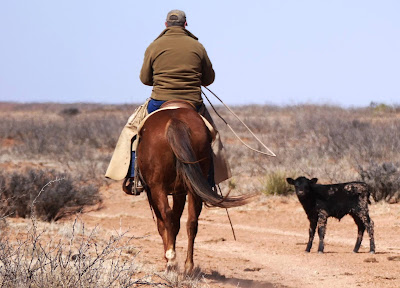 and brought her back to the house so that's baby #4 he's after: 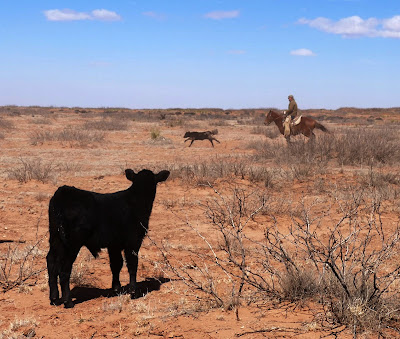 It was a pretty morning 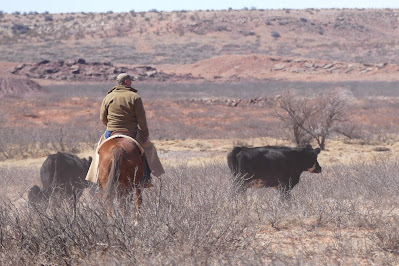 and we were grateful that the wind wasn't howling: 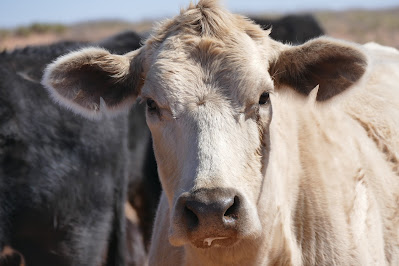 So that's what's been keeping me on my toes lately. And babies still need milk twice a day: 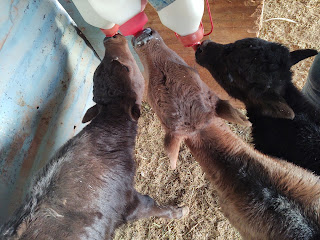 And yes, now there are three. Well, that was last week. Now there are 4. LOL. And Skeet is crushed that this one is a little older and drinking from a pail and does not need his anti-drip assistance: 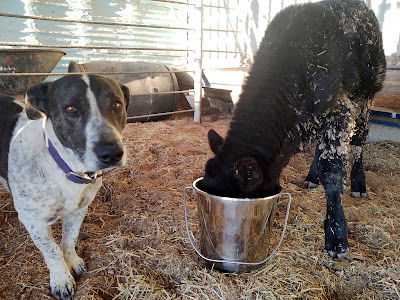 I told DH my baby calf dance card was full. These little rascals are becoming quite demanding. They don't finish drinking at the same time and I will let two of them suck on my fingers (because they will butt you to the ground looking for more milk) while I am holding the 3rd's bottle and letting him drink. And last Friday I noticed my class ring was no longer on my finger and surmised they had sucked it off. So, that meant I'd be looking for it you-know-where in a few days, but thankfully the little toot must have spit it out because I noticed it glinting in the dirt that evening. One of them will suck on the others' ear when he is finished with his supper: 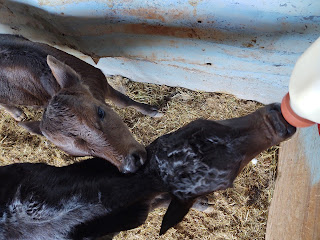 Nope. Never a dull moment around here. Right now, it is absolutely silent and I realized that the wind has stopped. The absence of roaring is very welcome. I probably ought to begin shoveling the dirt out of my house, but it's closing in on chore time and I'm going to soak up a little bit of that sunshine and Skeet and I will take the Ranger up to fetch the mail before we fix supper for the babies. Dirt shoveling can wait.
Posted by Ranch Wife at 5:30 PM

Oh my the dust! Last year I had to teach about the dust bowl era when I was a long-term sub. Wow!

Oh the calves! Glad at least one is drinking from the bucket. I remember doing that for my brother. It was a novelty to me at the time, not a job. For you, it's a big job. LOL on your calf dance card being full. It's so awesome that you are a great farm wife. Your husband is a lucky guy.

We have a place near Ruidoso...23 acres, not 128,000! I loved feeding those babies, but you are right, they can get pretty demanding!! Growing like weeds, I am sure. Where is your place?? You are a great cook for your crews!

OH MY GOSH!! You really are thinning the herd. I sure hope you get buckets of rain soon. That's so funny the babies suck on fingers, ears, whatever's available and the look on Skeet's face--PRICELESS!! We've had wind here but we've got grass holding down most of the dirt and we have had some rain so nowhere near what you guys are dealing with. I'm reading The Four Winds by Kristin Hannah right now on the subject of the dust bowl. So horrible makes me cry.

Hope you get some rain soon! That dust is horrible! Ugh! Love the pic of Skeet!!!

Good morning Karin, UGH to that wind. I don't know how a person can stand that, all that dirt flying around. Those babies are just so cute, glad you were able to find your ring right away, and not in the mess. Take care!

Wow! We have a lot of wind here in Iowa and the dryer it is the windier it gets, it seems! You are such a good farm wife! Wow! Giving the help cookies to take with them! I’ll bet you are a favorite ranch for the truckers! Love your blog....hope it rains soon. We had a heavy spring snow this past Sunday/Monday and it gave was much needed moisture as we are very dry here also. Scary for the farmers!

Same over here in southeastern Arizona--wind, wind and more wind along with the dust. I could dust the furniture every day is I wanted to--not happening! :)
It's sad to see the ranchers selling off herds--it's so incredibly dry and yet my family in Arkansas is experiencing torrential rains. I told my sister yesterday to send some of that moisture our way!

Whew, glad that you found your ring! How well I remember distracting the calves by having them suck on my fingers. May the coming days and weeks bring rain to revive your pastures.

We’ve had over 8” of rain since January 1 and the wind is a howling banshee!! Would share rain if I could!! No dust here in the mountain woods. You are a good, hard working wife as God commanded us to be. Wear a mask in the dust!!

Little calves are adorable! Sorry to hear you have to sell so many heads. We don't get winds like that nor dust. Praying for some rains at your place. Meanwhile, I could send some snow. Yep, we still have that. ;^)

Reading through your last few posts, Karin, makes me feel exhausted! You guys are so busy and the situation with (without) water sounds so stressful. And finding buyers, and even just having sell. You are a strong woman! I hope you get rain soon, and plenty of it over the next months!

Bless your heart--I feel for you with the wind. Growing up in north Texas (Wichita Falls), I always thought I knew wind. But we did a stretch in both Great Falls, MT and then in Las Cruces, NM, and then I knew what wind really was. I think we became sensitized to it, like an allergen--now we feel abused if we get 20 mph winds, compared to the 50 and 70 we endured in those places.

Praying for rain for you and your cattle. Skeet is a hero, helping with the calves like that.

It's been windy here, too, which makes it so much colder, even when the temps aren't showing that bad. I made the comment yesterday that I couldn't believe how much extra dust we had, and it's even getting inside the cabinets! And we've had rain, so it's not dust season here yet -- it's mud season. I wish I could send you some of our rain. Our weekend is predicted to be nice, so I hope we can dry out before the next round of rain. We usually end up with too much in the spring. And since we've downsized, there'll be no more babies around here -- cows or goats -- so it has felt really strange to not be on nanny watch this spring. But also so much less stress! You're always in my prayers!

Can you just imagine the dust bowl era - I think you were pretty close with this - but I am with you - no more wind, just rain ( and snow here) . The little baby claves are so cute!!! Glad she ( he) decided your ring wasn't all that tasty haha!! Sorry about having to ship all the cows.. the just sucks... Hugs to you, and a moment to put your feet up!