We sold more cows and weaned some calves this week. That means I had mouths to feed. DH is taking pity on me and we're foregoing breakfast for the crew, but my feet still hit the floor at 4 a.m. on Thursday. By 6, the Sour Cream Apple Squares were out of the oven and the Crock-pot Pizza was ready to do it's thing in the Crockpot:. 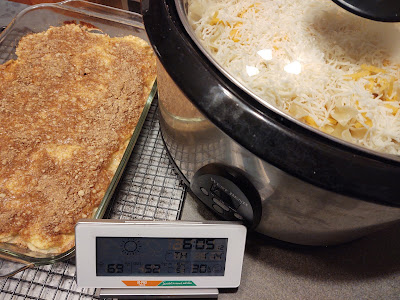 All I had left to do was make bread, a big salad. and green beans. I was being drafted to play the role of the Pied Piper by 7:30. We had to cross cattle over the highway and I drove the feed truck in front of them to facilitate the crossing. No traffic to contend with and it only took a few minutes to get them crossed. Alas, no pictures because my job was to drive and not take pictures, but occasionally we DO have to cross the highway. Here's a photo from many moons ago when I just had to park across the highway to stop traffic: 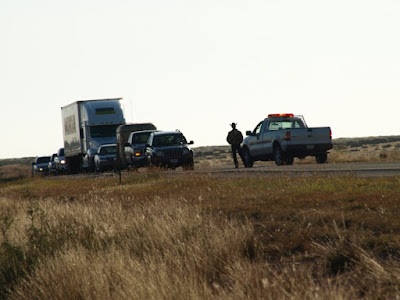 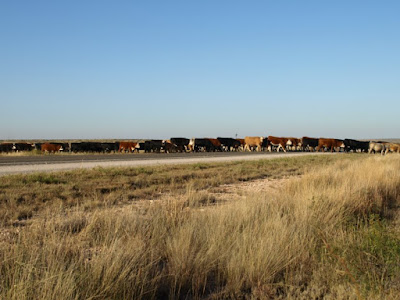 It took me a while to get back to the house and start my bread dough because of this: 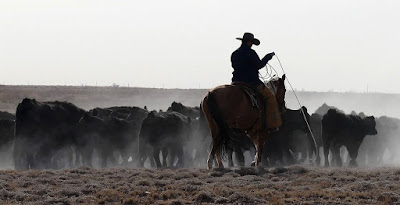 This is the only kind of traffic jam I don't mind getting stuck in: 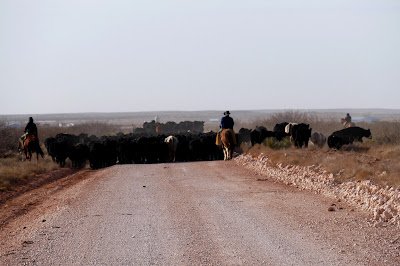 Once the cattle crossed to the south side of the ranch, the boys drove the cattle 2 1/2 miles to the pens here at the house:

Yesterday morning it was 15°, but on Thursday it was 52° - much nicer when you've got to be horseback before the sun comes up - although once the wind began to howl, it dropped the temp to 35°:

We ran the cows through the chute to be preg checked: 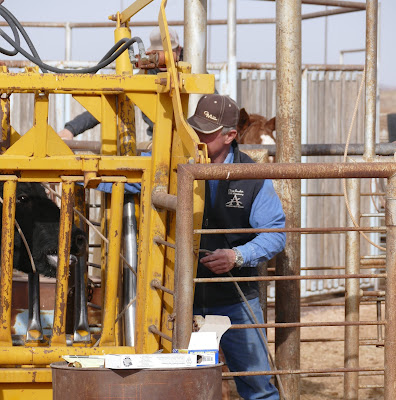 My BIL is a cattle broker and he found the buyer for these cows so he drove from Texas and stayed the night. Good to catch up with family over breakfast and a cup of coffee: 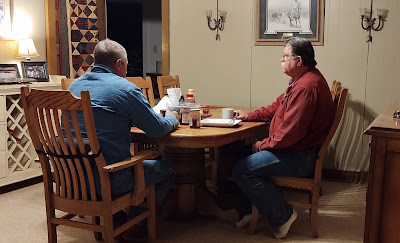 We loaded trucks on Friday morning 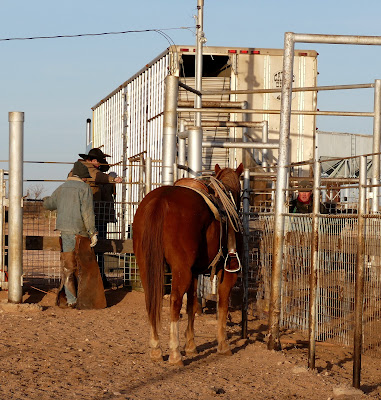 All of this came into play on Wednesday so there was a lot of scrambling to organize help, the brand inspector, the vet, trucks, and payment. And that meant, yep, you guessed it - cookies. 😋 I had 8 for dinner on  Thursday. Had planned on dinner Friday, but they loaded the truck at 8 and finished sorting calves by 9 so they just pulled out with cookies: 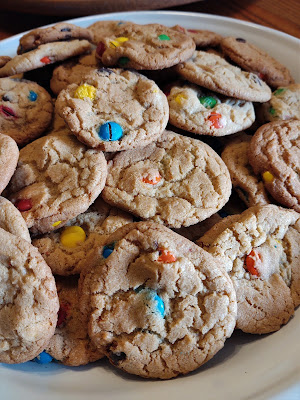 The fella that takes care of the neighboring ranch is young and single so I loaded him up with leftovers. He really is our neighbor even though there are 28 miles between our homes.

Now someone needs to do something about this mess: 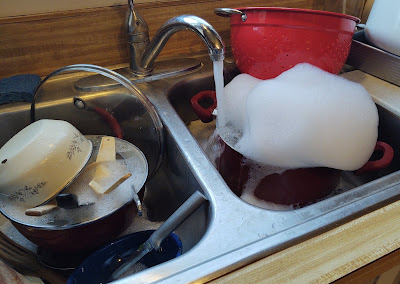 No grumbling though because a messy kitchen means the Lord has blessed us with food to cook and serve and with a crew to feed. He also blessed me with a nap.

Ooo, those sour cream apple squares REALLY sound good!! MAN, you guys are busy but then aren't you always?!! LOL

Your blog is so uplifting, thank you for posting and sharing your daily life pictures and story. Now if you could just direct me to that Crockpot Pizza recipe I'd love to try it out on my grandkids! Thank you

I love your pictures of ranch life...reminds me of my life as a child. You are a lovely person to cook for all those people...lucky ranch hands, for sure!

Pulling a crew together quickly would be difficult. It takes a lot of coordination of schedules. Sorry the drought is making feed scarce for the cattle.

Thank you for sharing your ranching life. So different from farming in my area.

Your life is just so interesting, Karin, and so different from mine. I'm not sure how well I would do getting up at 4 a.m.! I wouldn't mind being stuck on the road watching the cattle cross. What a lot of them! Is it a blood test to check for pregnancy?